Euclid is a free online game to test your Geometry skills. Simple to play yet incredibly addictive, Euclid puts your knowledge of Geometry to the test by requiring you to draw simple mathematical shapes, using a provided set of tools.

The game is divided into a number of levels, including a starter tutorial level. Each level involves using some pre-available geometrical shapes (e.g. Line Segment, Ray, Point) to draw other shapes. When you complete a level successfully, an extra geometrical shape (called a tool) is added to your collection of shapes. Every time you complete a level, you’re awarded a medal, with the number of moves made to complete that level. Completing a level in the minimum moves even earns you a Gold medal.

Euclid can be easily played via mouse, and has some handy keyboard shortcuts as well. You can even post your high scores. Wanna know more? Let’s find out.

How To Play This Free Online Game To Test Your Geometry Skills?

Playing this online game to test your geometry skills is extremely easy. There are no sign-ups, no accounts, or anything of that sort required. All you have to do is go to the homepage, and the game is automatically loaded. There’s something interesting to note here. When you fire up the homepage for the first time, Euclid will automatically direct you to the initial tutorial level. Once you complete the tutorial level, the first level will be automatically loaded up (and so on, for all the subsequent levels).

However, if you directly want to jump to a specific level (let’s say, from tutorial to level 3), then you’ll have to do that using the level specific URL. To do that, simply enter: www.euclidthegame.com/LevelX (where X denotes the level number you want to jump to) in your browser’s address bar. 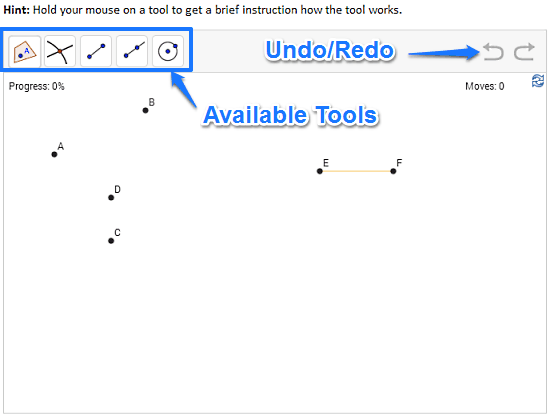 Pretty simple, don’t you think? As illustrated by the above screenshot, the tutorial level (and as a matter of fact, any level) consists of a couple of points  randomly scattered around in a space. The top left corner lists a selection of tools (basic shapes) that you can use to complete the Goal. The right corner features undo/redo buttons just in case you make a wrong move. Apart from that, there’s just a bare-bones progress and move counter. You can hover your mouse over a basic shape to see its purpose and usage.

You have to complete each and every goal in order to proceed to the next level. Now, playing is really easy (though gameplay isn’t!). For example, to construct a line segment from A  to B, simply click the point A, press and hold the mouse button and release it on point B. Once you do that, the line segment will be created. Similarly, to create a ray from C to D, press and hold the mouse button from C, drag it over D, and release it a bit further. Remember that you can only use the tools available in a level to complete that level. Here’s a little animated graphic, illustrating the gameplay:

Not that hard, right? Once you complete a level, the next level will be automatically loaded. Now go have fun playing!

Though Euclid’s primary gameplay uses the mouse as the control device, it also has a couple of nifty keyboard shortcuts that can make you play a bit faster (especially if you prefer keyboards). These are mentioned below:

Euclid is a pretty awesome game that tests your Geometry skills. Though simple and barebones, it’s really challenging, and you need to be very, very good at Geometry if you want to make a high score. It’s fun, and works the way it’s supposed to. To top it off, it’s incredible addictive. If you’re looking for a fun and challenging way to brush up your Geometry skills, give Euclid a try. You’ll love it.