Infinite Screen is a software which allows you to move and scroll your desktop infinitely. It creates a virtual desktop which means it increases your screen resolution, and in the case of this tool it is infinite. So you can scroll through the windows by the assigned hotkeys. The good thing about this tool is that there is no fixed increase in screen resolution, it is infinite in that sense. You can move the screen by moving the mouse at the screen edge, scrolling the mouse, through keypress and Oneclick desktop moving. Many a times a screen is too wide and windows cuts it down to maximum screensize and you miss useful information from the side. At that time this tool will come handy as you will be able to see the cut out portion by scrolling.

See an example below: 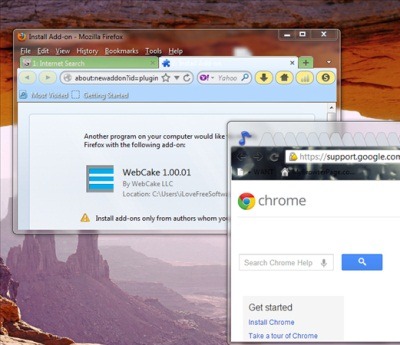 This shows the window which has moved out of the maximum screen resolution of windows. Read further to know how to use this tool.

How To Move Desktop Screen:

Infinite screen has five modes to move or scroll the windows. There are mouse and keyboard scroll and keypress options. Let me tell you about the five modes first:

So, these are the modes. Now you can configure the activation key or use the ones which are pre assigned. You can adjust the mouse scroll area from the options. Once you are done just click on the Apply button.

See the screenshot below for reference: 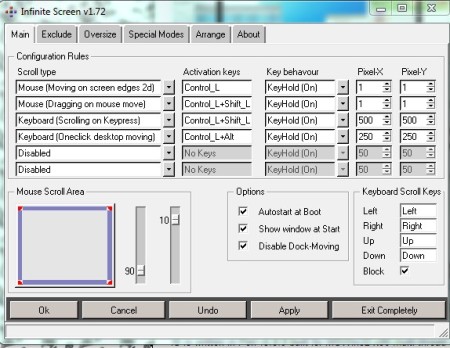 Now, the windows in the screen will move according to your keypress or scrolling.

Also, as you can see in the interface there are various bars. Click on Special modes, where you will find three modes to choose from- Infinite, Finite and Loop. These modes are for setting a limit for the virtual screen size.

See the screenshot below to get an idea: 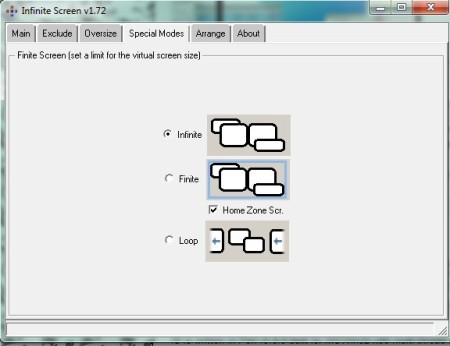 Install this software from the link at the end of the article. Click on the download option and the exe file will install in your computer.  Run it in your system and the software would open up.

A video has been incorporated for you to get an idea on how it works:

Get Infinite screen for free!