Notepads is free Notepad replacement app for Windows 10 with some really amazing features. This is an open source app with UWP interface that you can use easily. Here this app comes with built in markdown viewer, diff viewer, themes, multiple encoding options, custom accent color, tabbed interface, multiple type of line endings, and much more. You can easily use it in place of Windows 10’s built in Notepad and do whatever you want

Currently this app is in beta stage and in the stable version, you may get to see some new features too. Right now it is available on Microsoft App Store and you can install it from source code as well. The UI of the app is very nice and it is translucent one that you usually see in apps like new Terminal app from Microsoft. On the bottom side, it even shows you line number, column number, and encoding like details.

Notepad that comes with default Windows installation hasn’t evolved so much. I don’t know why Microsoft didn’t consider upgrading it in Windows 10 but some third party apps have been released over the years. And Notepads here is one of the best that I have ever used. You can install this in a couple of clicks and then start using it to edit and create text based files on your PC. You can set it as a default app for TXT and other files and it will assign its icon to those files as well. 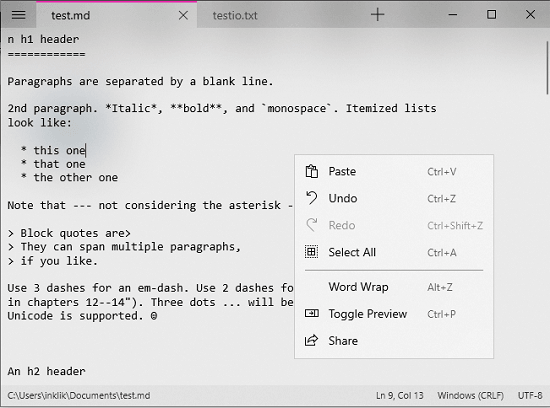 Notepads is available on GitHub as well as on Microsoft Store. Based on your choice, you can install it from either location. After installing this app, you can start using it right away. The interface of the app is like of other UWP apps and you will like it. You can see the following screenshot to see the main UI of the app. 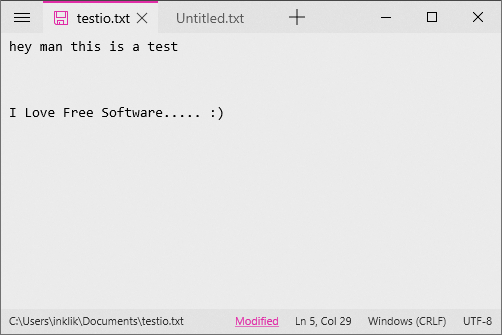 Now, just start writing something and then save it using the usual shortcut keys. As I have mentioned before that it supports markdown so you can use it as a markdown editor too. Enter some markdown code, save a file as MD, and then hit Ctrl+P to see the preview. The preview opens in a dual pane interface. 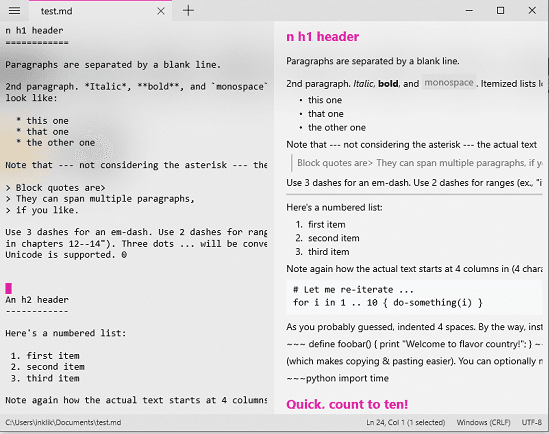 Next thing you can do in the Notepads app is tweak its UI settings. You can go to the settings using the hamburger icon and then access the “Personalization”section. Here you can tweak the theme mode, accent color, and the background opacity. The color chooser is amazing and you are free to choose a color for the accent. 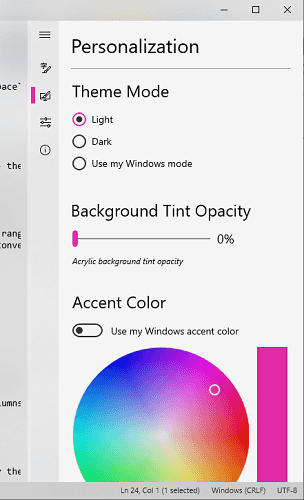 In the settings section, you can tweak some other aspects if the notepad as well. Here it lets you choose a specific line ending mode, default font and size, default encoding, and fallback encoding. See the screenshot below. 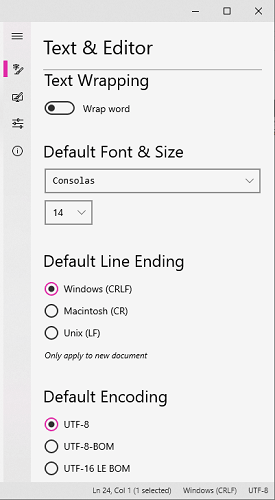 In this way, you can use this simple and elegant Notepad replacement app on Windows 10. The app is fast and you can easily make you one. After making it your default app, it even changes the file icon of TXT and MD files. Just install the app and just start using it to edit any text based file on your PC.

Notepads is really an amazing traditional Notepad replacement app that you can start using. All you have to do is just get it from Microsoft Store and start using it to edit TXT, Markdown, source code files in the same way you edit in other editors. Overall the app is simple and has almost all the features that an ideal text editor should have. So, just give it try and let us know what you think about it.