Letter Feed Messenger is a great freeware Google Docs add-on that’s available for both the Docs and Sheets modules of Google’s online office suite. Currently, it supports only Google Chrome. Letter Feed Messenger enhances the already strong collaborative features of Google Docs by adding instant messaging capabilities to your documents. Thus, you can instantly see and track any changes that are being made to any collaborative document(s) by multiple collaborators, all in real-time.

Now, Google Docs already has a built-in Comments section in which various collaborators can chat. What Letter Feed also does, in addition to its instant chat, is that it shows the stream of changes that are being done. So, whenever someone adds something, or deletes something, or changes something; Letter Feed will show all that as a stream in its instant messenger.

Here is an animated graphic that shows this messenger in action:

Step 1: Go to Letter Feed Messenger’s homepage, and add it to Docs or Sheets by clicking the respective button at the bottom of the homepage.

Step 2: Once you do that, Messenger asks your permission to run. After you allow it to run, it works its magic for a few seconds and finally lets you know by a pop-up that it can be run via the add-on menu. 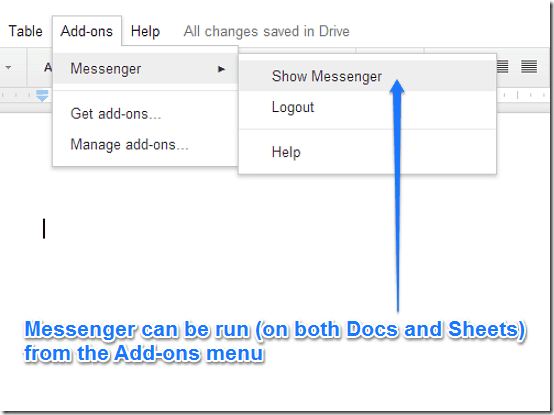 Step 3: That’s it. Once you start messenger from the add-ons menu, it appears as a side-bar on the right of the collaborative document (or spreadsheet) that you’re working on. Check out the screenshot below: 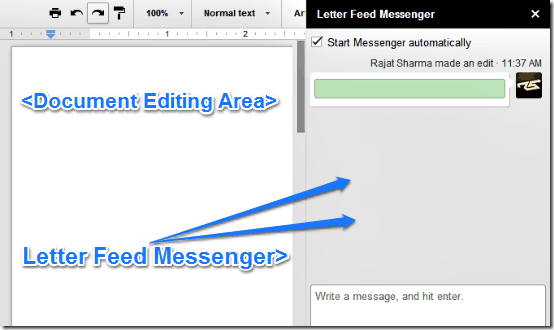 How to use Letter Feed Messenger to view and discuss changes to your Docs and Sheets?

That’s all there’s to it. Letter Feed Messenger works exactly the same way for Google Sheets as well. All you have to do is add it to your browser, and run it from the Add-ons menu when you start working on any collaborative Google Docs or Sheets. Wasn’t that hard now, was it?

Letter Feed Messenger is a great freeware add-on, especially more so for those who rely a lot on Google’s online office suite for their daily productivity needs (myself included). Although Google Docs already has a similar comments functionality, where collaborators can chat with each other regarding changes being made to the collaborative documents, Letter Feed Messenger takes it a notch further by merging chat and document changes in a single interface. Other features, like different colored highlights for the changes to the document(s), and seen timestamps are added goodies as well. I suggest you give it a try, it might just be what you need.