We all have witnessed Solar Eclipse and Lunar Eclipse several times in our life. Eclipses are very major phenomenons that involves more than two galactic masses aligning in a straight line. As we all know, there are two types of Eclipse that are majorly visible from Earth; Solar Eclipse and Lunar Eclipse. This is something that you do not get to see everyday. And even though an eclipse happens, there are chances, it will not be visible in your area. But, there’s one thing you can always do. Simulate a solar eclipse or simulate a lunar eclipse on your PC, that too from just one tool. This eclipse simulator named Eclipse Interactive is a Solar eclipse simulator and also Lunar eclipse simulator.

Just to make our reader sure, no this is not the Google’s solar eclipse simulator of the great solar eclipse from 2017, which is all over the internet. 2017 and the great eclipse are gone, why’d anyone still want to simulate it? This simulator lets you simulate eclipses in general. 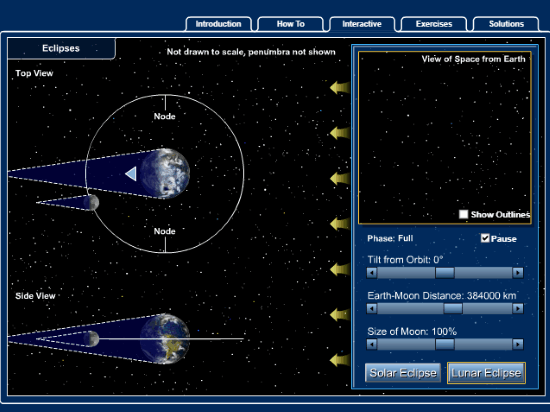 This is the how the online eclipse simulator looks like. It gives you the top and side view of the Earth. You can also see the moon orbiting around it. Notice the sliders? Yes, there are several parameters as well that you can vary to view their effect on eclipse. You will get to know all about them; read along.

First, we will see how to simulate solar eclipse, then lunar eclipse. While we do that, we will also try to change several parameters and observe their effect.

You might want to checkout these Interactive Universe Map. 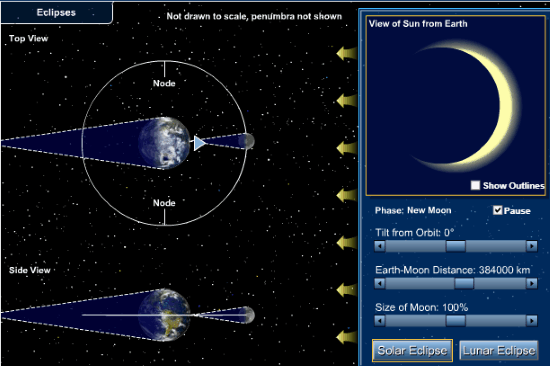 You can simulate eclipse by moving the Moon around the Earth by dragging it. For Solar Eclipse Simulation, you have to keep the Moon on the right side of Earth. As you move the Moon and put it in between Earth and Sun’s rays, you can see solar eclipse in effect. The view of sun is displayed in the little box on the right. As you move the moon, you will see the shadow of moon cover up the Sun. 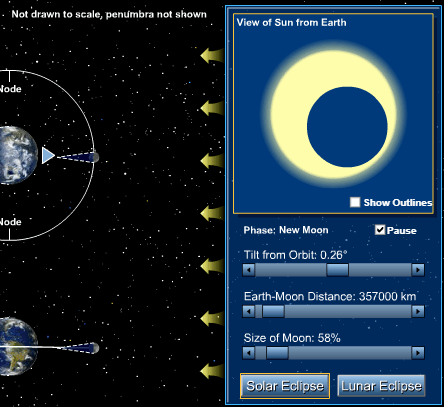 You can use the sliders at the bottom of right panel to vary various parameters. You can change the tilt in Moon’s orbit, vary Earth-Moon distance, and size of moon. By varying the sliders, you will be able to view the changes made in real time. 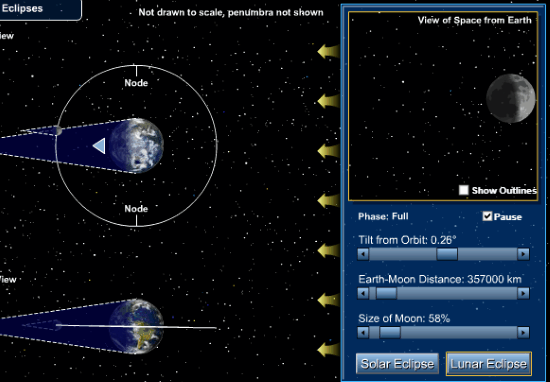 To use this tool as a lunar eclipse simulator, you will have to drag and put the moon on the left side of Earth. As you move the moon, you will be able to view the eclipse on moon on the right panel. Here again, the shadow cast is subject to change according to the sliders.

You can also run animation. To do so, click on the Pause check box to uncheck it. This will begin running the simulation automatically.

Eclipse Interactive is a great way for students and science enthusiasts to learn about eclipse and how they work.