Facebook has released Mobile Device mockups for popular smartphones. You can download these mockups completely free and use in your personal or commercial design projects. These mockups are ideal to showcase how your website or app will look on a particular mobile device.

The package released by Facebook consists of png files of mockups, as well as .SKETCH files of the original design. In addition to that, the mockups include designs with shadows as well as without shadows. And in case a device is available in multiple colors (like, iPhone 6S), then different color variations for that device are also available. The devices in this mockup set include both Android phones as well as iPhone. Facebook has mentioned that it will expand the set to include more smart devices, like, tablets, Smart TVs, Wearables, etc. 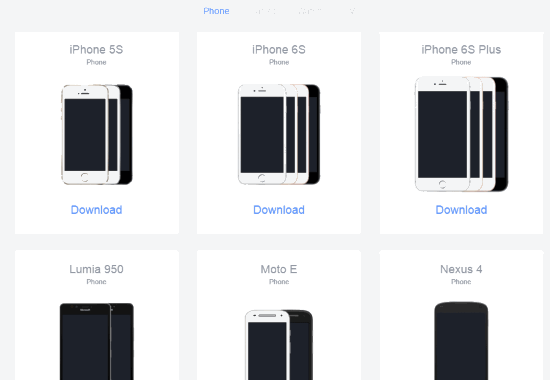 At the time of writing, following smartphones are included in this mockup set:

If you are a designer or web developer, these smartphone mockups will save you some time in rendering your creation. Just pick any mockup and start modifying it. Of course, the fact that .Sketch file is also included is an added advantage.

If you are making mockups for Android, you can pick one of the existing Android phone mockups from the list above, add some nice material design icons, use some free stock photos, and get going with your design.