Here, are 5 free Wikipedia app for Android. Wikipedia is world’s best online encyclopedia. The site is ranked no. 7 globally and about 15% of the total internet users browse Wikipedia. So, a need for Wikipedia app on Android is must. Let get into each Android Wikipedia app.

Wiki Encyclopedia is the most popular of the Wikipedia apps on Android Market. Users can browse Wikipedia both in mobile and desktop format. This free Wikipedia app loads up with the official Wikipedia logo. Wiki Encyclopedia is supporting a large number of languages including French, Indonesian, Afrikaans, Russian, Latin and a lot more. A Newspaper tab is also there which lets you view latest news articles. The search feature is also voice supported. Users can use their voice to search on Wikipedia. With Wiki Encyclopedia users can select and copy text. They can also move the app to SD card. The free version app is ad-supported.

iPad users can look for Wikipedia iPad apps reviewed by us. 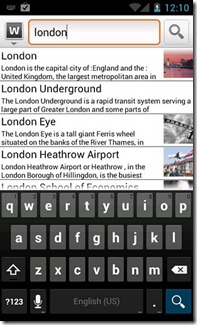 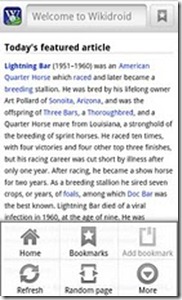 WikiDroid has got some unique features that other Wikipedia apps often lack. The search bar is at the top, and the UI is like that of the Android in-built browser. With WikiDroid, users can save Wikipedia pages on the memory card for future reading. It supports all the Wikipedia languages. The app also includes a quick search widget. Bookmarks can be added to articles. Full screen mode makes reading an article easier. Users can also copy text from the article’s page with WikiDroid for Android. Alike most of free Wikipedia apps, WikiDroid is also ad-supported, and a pro ad-free version requires a $1.99 purchase. 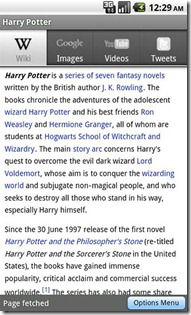 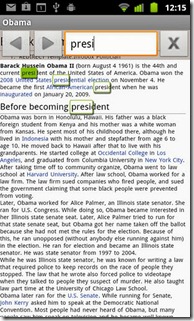 WikiDroyd is another free Wikipedia app for android phones. It allows users to save the Wikipedia pages on the phone for offline reading. Users can also search text within a page. Most common articles can be added to favorites. There is also an additional feature in WikiDroyd for text to speech conversion called Droyd Speech Plugin. This additional feature is usually available in paid version, but now you can get it in the free version, as well.