Advanced Screenshot Creator (ASC) allows users to take screenshots of Android phones from PC in a single click. Taking snapshots of your Android phone screen and then sending them to PC used to be an elaborate process but Advanced Screenshot Creator has made it very simple and fast. You just need to connect your phone to your PC using USB (make sure USB drivers for your phone are already installed on your PC) and then use this software to take screenshots of Android screen from PC.

The freeware has three simple controls that help the users to capture images of their Android phone from their Windows PC. It lets you set the output folder and saves all the screenshots automatically. The application has a preview feature. You can replace the image with another screenshot if you don’t like the preview. 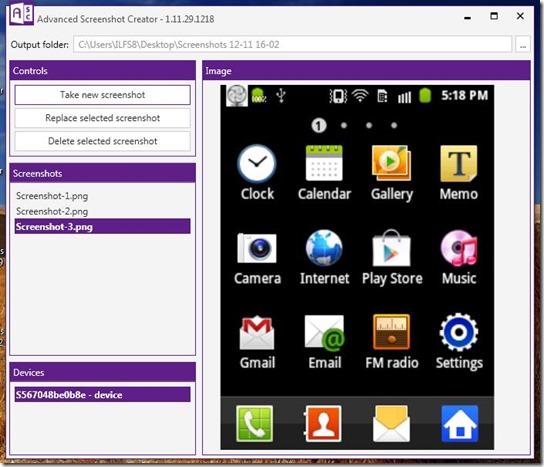 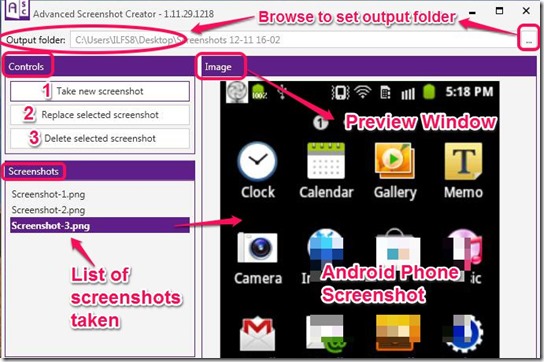 First of all, set the folder where you want to save your captured screenshots. Browse to the desired folder from the 3 dots button given to the right, just below the close (X) button. Once you have defined an output destination, you can go ahead and start taking screenshots of your Android phone with your Windows PC using Advanced Screenshot Creator.

Also, check some of the screen capture extensions to take screenshot in Chrome that we reviewed earlier.

Advanced Screenshot Creator is really good software that takes fine quality screenshots in just 1-click and automatically saves them. It is very simple to use. There was only one issue that I found troublesome. It could not capture pop-up windows, and did not capture screenshots when the screen was too bright. But this software is so hassle-free that I still like to use it.