And the objective of this game is to go for the lowest score possible in each round (also called trick), so that you’ll have the least score at the end of game; because the player with least score is the winner. 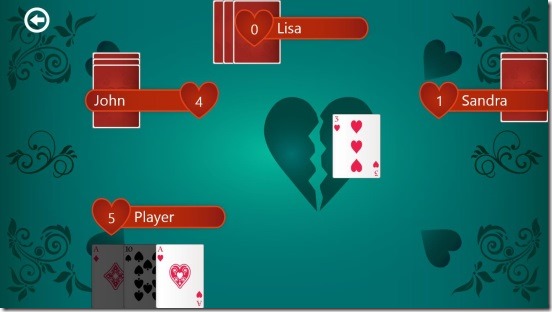 The game is played between four players. All the rules apply the same way here. The cards are ranked according to their number, with “2” as the least and “K” as the second most highest, and “A” as the highest in each suit.  Each player gets 13 cards from the deck at the beginning. Once the cards are dealt, each player gets the option to pass three cards from the thirteen cards , he/she has got initially. The objective of this passing of cards is to try to become sort or null (empty) in a suit. If you run out of cards of a suit, then you can deal the bigger cards of another suits when your turn comes. Thus helping in getting rid of bigger cards. 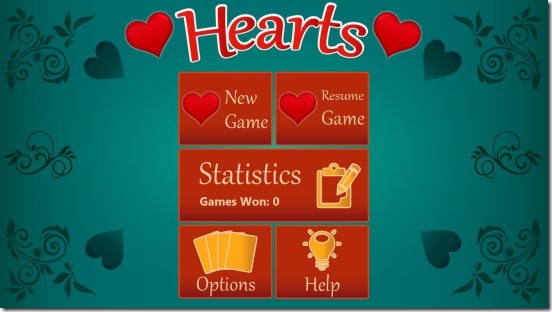 The player tries to get rid of bigger cards because the player who throws the biggest card (highest value card) in a round, wins that round. And winning a round is a bad thing in hearts, because there are penalties for winning rounds. The penalties are marked in the following fashion: 1 point for each Hearts cards and 13 points for Queen of Spades. So in a way, the objective of this game is to avoid getting any hearts card and the Queen of Spades. 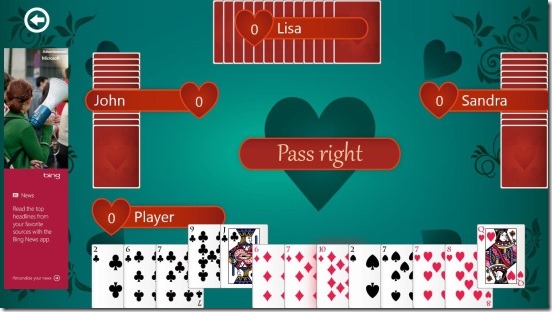 Once each player finishes passing their three cards, then the player who’s to the left of the dealer deals first. Each player, in clockwise order plays a card from their hand. It is mandatory to follow the suit which the first player dealt until you ran out of cards of that suit. Once you are out of that suit cards then you can break the suit match, and deal any card. The trick in such situation is to deal bigger cards, so that you’ll have only smaller cards. The round continuous until each player deals all the cards. The player who won the round will be the lead player of next round, and the game continuous to ten times. At the end of the 10th round, the person having the least score wins the game. 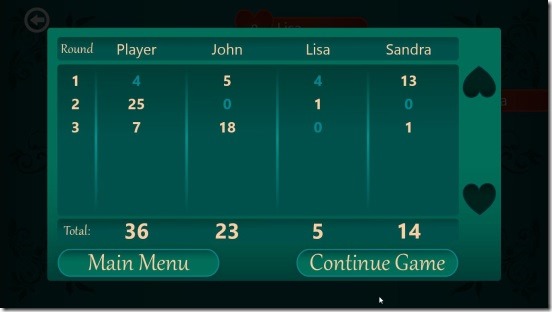 That was the gameplay of this Windows 8 hearts game app. The app works pretty smooth. It’s fast, has got great animation, graphics are pretty cool. One good thing about the app is it saves your current game, and gives you option to resume it at the Welcome Screen. Also I liked the Statistics option, this helps in keeping track of your game performance. The app also gives you great control over game difficulty as well. If you like to challenge yourself then you can set the difficulty to Hard. 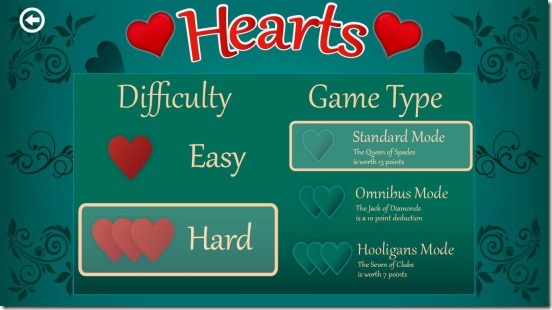 There are two further game types besides Standard mode, which are: Omnibus and Hooligans modes. The difference between these are: In Standard Mode, queen of Spades is worth 13 points. In Omnibus mode, jack of Diamond deducts 10 points from the gained points, and in Hooligans 7 of Clubs is worth 7 points. 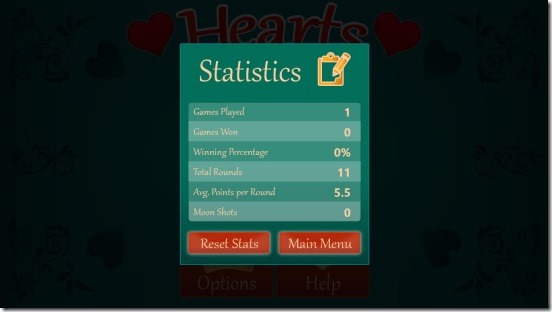 If you have any trouble in learning to play hearts then click here.

Hearts Deluxe is a good free Windows 8 hearts game app. It does requires your complete focus in the game. As a tip try to finish a suits cards first in a particular round, and remember which cards have been dealt. I had great time playing hearts in this app. Definitely a good free Windows 8 app to try your hands at.