This is a list of 5 free Audio Switcher software than can change the default audio device of your system easily and quickly from the desktop or the tray.

Changing the default input and output device is a slightly long process. You have to go to the Control Panel first, then the Hardware and Sound Settings, then Sound and finally switch between the playback and recording  devices in the settings. This becomes troublesome when you have multiple audio devices connected to your system which you cycle through always.

Thanks to these 5 awesome audio switcher, you don’t have to bang your head on your audio devices anymore.

You might also find Audio Router interesting. Audio Router is used to route audio from different programs running on your Windows to your choice of audio output device. 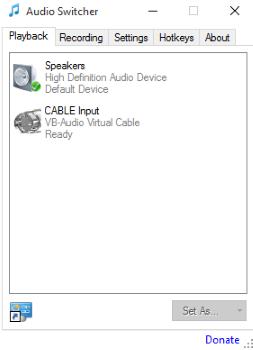 Audio Switcher is a free software you can download to make switching between audio devices much easier. The best part of Audio Switcher is its portability and lightweightedness. Users can access the default Windows audio settings from its interface too. It provides you an array of settings where you’ll find Quick Switch Mode. This option will allow you to cycle through audio devices with a single click on the tray icon. Hotkeys can be set to make the device switch even faster. 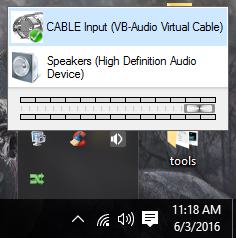 AudioSwitch is a much more sophisticated audio device switcher in this list. You’ll find a lot of options when you go to its settings by right-clicking the tray icon. AudioSwitch can also be set to switch audio devices by right-clicking its tray icon (in the settings). When you switch the audio device, an on-screen display (OSD) will be shown which only displays the volume level of the currently selected device. AudioSwitch also allows you to change its visual elements, namely the on-screen display and the tray icon. Hotkeys can also be assigned to different audio devices. 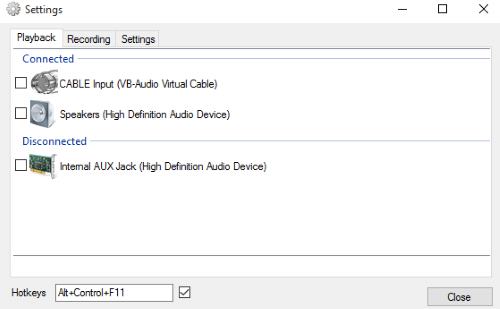 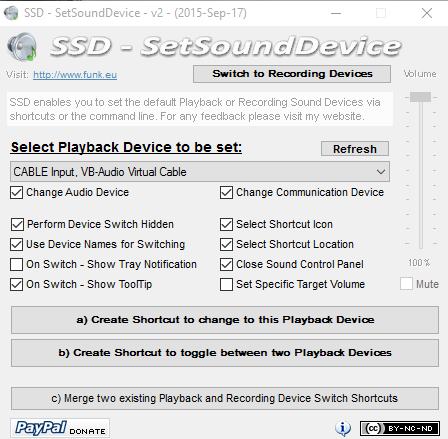 Set Sound Device is another tool to change the audio devices on your Windows system. Unlike most of the entries here, it does not have master controls to change the audio levels or other behavior changing settings. Set Sound Device simply makes shortcuts on your desktop which will change the default audio device for output and recording. A Shortcut can be made to change to specific playback/recording device or you can make one to toggle between two different devices. Playback volume can be changed from the tray but you might have to go to the control panel to change recording device level and other settings.

NirCmd is a widely used commandline tool that can be used to do a lot of tasks on Windows like hiding clock in the system tray, clear the clipboard, empty recycle bin, etc. NirCmd can be used to create shortcuts to change the audio devices, just like Set Sound Device. Make sure you copy nircmd.exe to the system32 folder so you can launch it easily in the command prompt.  You’ll have to make a batch file for each audio device you intend to switch to. Here are samples of the batch files I made:

‘setdefaultsounddevice’ is the command used to set an audio device as default in NirCmd. Make sure you have the correct name of the device, which can be found in the sound settings in the control panel.

I feel the best tool in this list is Audio Switcher since it is lightweight, portable and contains enough options to deliver efficient usage. Set Sound Device and NirCmd might prove to be a bit bumpy when initially usage. But, after you have setting them up, you can reach for the shortcuts easily on the desktop. Find your pick!