Here is a free Twitter bot to auto reply tweets of specific hashtag. The bot that I will talk about in this article is known as TwitterAutoReplyBot and it can easily reply to specific tweets which contain the hashtag, set by you. This is a completely customizable bot that you can use. You can set the number of tweets that it will fetch, specify a reply text that you want, and a hashtag that you like to be in the tweets that it will look. After that, just run this bot and it will do the job for you in a few seconds. However, I would like to mention one thing that is, do not use this bot for a large number of tweets, Twitter API doesn’t like that and it may block your account as well.

TwitterAutoReplyBot is a simple and easy to use bot. Even if you don’t have a deep knowledge of programming, you will be able to use it. Just customize it according to your needs and it is all ready to do its work. And if you have some knowledge of Python, then you can enhance this bot by adding other features. 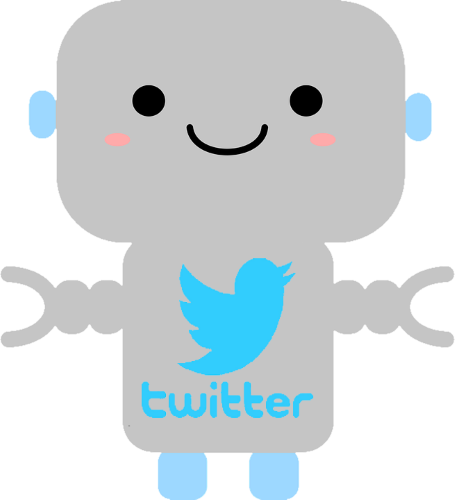 How to auto reply tweets of specific hashtag?

TwitterAutoReplyBot is an open source bot to automatically reply to tweets of a particular hashtag. This bot is written in Python and you can run it with the help of some easy commands. You can run it anytime you want.

Here are the steps to use TwitterAutoreplyBot.

Step 1: Download the repository of TwitterAutoReplyBot as a ZIP file from here. After that, extract its contents and you will see two Python source code files there. The two files are “keys.py” and “bot.py”.

Step 2: Obtain your Twitter application credentials. If you don’t know how to get API credentials, then you can see this article to obtain those for the bot.

Step 3: Now, open the “keys.py” file and insert the API credentials that you obtained in step 2. After that, save the changes in that file. 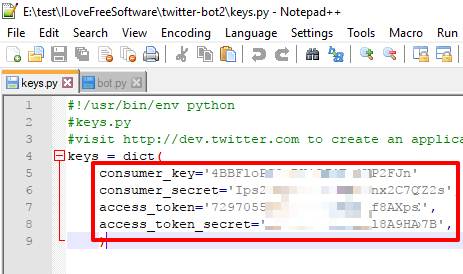 Now, open “bot.py” file and then at line 15 specify the hashtag, the number of tweets to fetch, and type of result you want to target for replying the tweets. Also, at line 20, you can specify the text that it will use to reply to the target tweets. 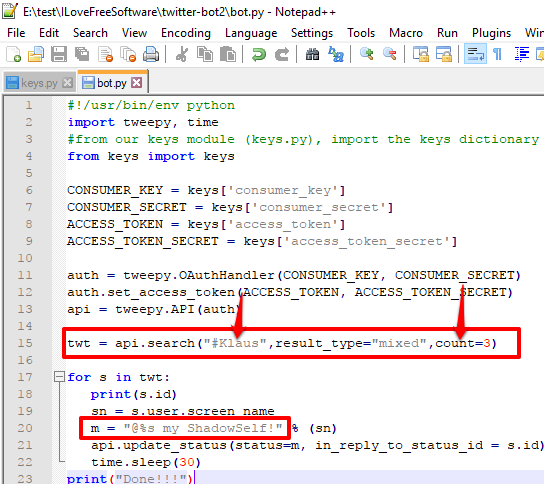 Step 4: Open command prompt in the same main folder of TwitterAutoReplyBot. After that, you can just run one of these commands.

There are some paid tools that you can use to do the same. But if you want to do this for free, then this article will help you. The bot that I have mentioned above works perfectly and can reply to tweets in just a few seconds. However, please note that do not use this bot to post the same reply to a lot of tweets. Otherwise, Twitter will ban your account.