Avast is a free antivirus software for Mac OS X. Avast is a very popular antivirus on Windows platform and has made it’s name. Now Avast antivirus is available for the Mac operating system.

Most us might not even heard of virus or malware on Mac and we think that it’s a Windows only phenomenon. But these days things are changing.  There are some nasty malware on this platform too that can cause great damage to your system. Yes, the chances of you getting a malware are less on Mac as compared to Windows, but its better to be safe than sorry. So you might want to have an antivirus installed on your Mac as well.

When Avast for Mac is opened up it shows us a summary status as shown in the screenshot below. 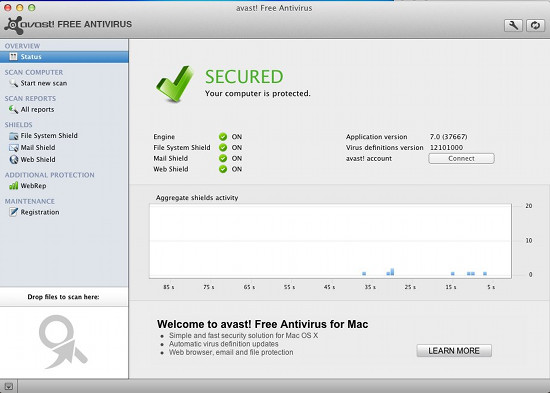 This version of Avast antivirus offers the same type of security as it does for a Windows PC. Avast offers security on two levels: it has a scanner that is able to scan disk for files that can be harmful for your Mac. And it also has a second component that manages the security on the Internet and monitors web browsers for suspicious activities.

This free antivirus for Mac is very fast and easy to use, it does not hog up the memory or slow down the computer while scanning the drives etc. I personally did not find any hang ups while running the scanner.

The interface of the application is little different from the Windows version and looks much prettier than the other one. The applications looks are more toned down on Mac. This makes the application looks more classy and subtle.

Feature of Avast for Mac: 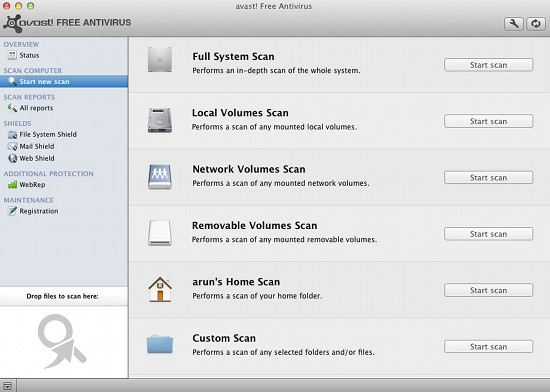 Firstly I did not find any malware on my Mac, suck it Windows. While the application was running I did not experience any lags or hang ups caused by the Avast. Anyway this is a free application that provides great amount of feature and functionality. These days as Mac is getting more and more popular, it seems that people have started targeting them. Yes, it not as bad as Windows and Mac has a better architecture and will not get as bad as Windows like ever.

But I would recommend that install and keep this software running just as a precautionary tool, if it does not affect for Mac’s performance. To download the file click here and install this as any other Mac application.