This app simply lets you choose the video, crop the video as per your choice, see the preview, and save it for sharing it with any one you want. All the vertically recorded videos are automatically transformed into landscape mode so that you can crop the video in such a way that you get the best output possible. The app is really simple to use with no extra options like add filters, texts, stickers, etc, and it doesn’t even provide built-in video sharing options.

Note: This app is compatible only with iOS 8 or later devices. 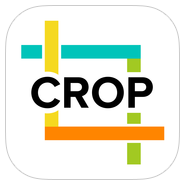 The app is extremely easy to use with no need of any registration or any kind of social account linking. Just when you launch the app for the first time, you need to give permission to the app for accessing your iPad albums to fetch videos. On granting the permission, you will see the home screen of the app with grid view of all your videos on iPad.

Tap on the video which you want to correct from Vertical Video Syndrome. You can select only one video at a time. Once the video is selected, it will be automatically displayed to you in landscape mode. Check the screenshot below, it’s a video shot by me in vertical mode. 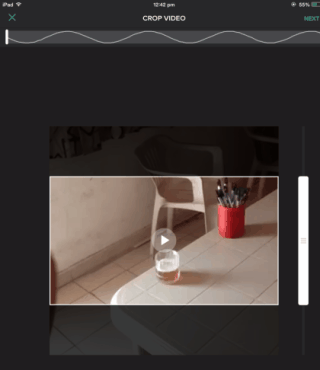 Tap on the video thumbnail image to play the video. When video starts playing, then you can crop it in real-time by just swiping on the screen. The area of the video inside the rectangular box is the one which will be included in the video while the area outside will cut out. The waves at the top are displaying the portions of the video where you have cropped it. 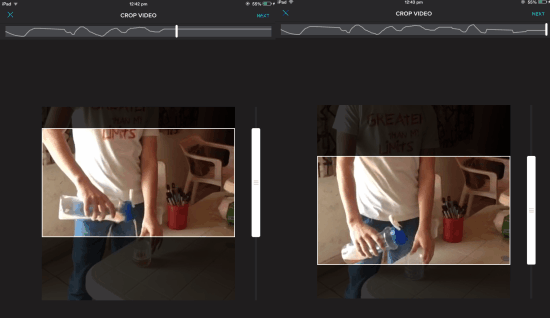 You can also choose to tap on the screen to pause the video and then adjust the rectangular box. When you have adjusted, then tap again to resume the video. When the video gets completed, tap on Next option to see the preview of the video. 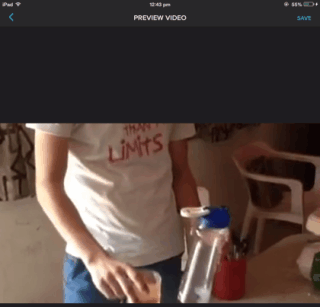 If you are satisfied with the preview, then tap on Save to save the video to your iPad photo album. If you don’t like it, then you can always go back to the editing screen.

You may also like: Free iPhone video editor with Reverse Video, Video FX.

Crop on the Fly is an awesome and super easy to iPad video editor to correct vertical video syndrome. The app makes it really easy to rectify vertically shot videos and make them normal landscape videos. Do give this app a try, its a must have app for those who tend to shoot vertical videos more often.

Get Crop on the Fly here.