Here are some free visual traceroute mapper software for Windows. Using these free software, you can easily identify the route to a desired domain and plot the corresponding Geo location on a map. Most of these software use Google Maps or other Maps API to show the location. And in some of them you can also export the result to a file. You can see the path to all the intermediary hops and list them along with their location. Other stats like IP address, round-trip time, number of hops can also be seen.

If you often use the traditional tracert tool which comes built-in with Windows, then you know that the output that it produces is fairly simple. And if you want know the Geo location of the hops in between the route, then you can use these software. 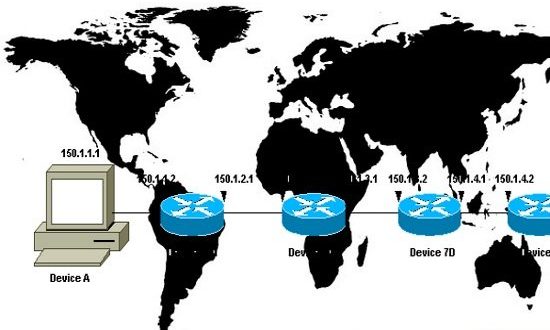 Even though, there are plenty of ping software and traceroute software available, but they don’t plot the Geo locations of the hops on a map. And that’s where these software come in handy. So, let’s have a look on these free visual traceroute mapper software.

World Route is one of the best free visual traceroute mapper software for Windows. The software comes with an intuitive interface and you can easily use it to map the Geo location of the hops that lie between the destination and your end. You can see the all the locations along with their IP address and host names, if available. Also, a corresponding map is plotted showing the route on the map. Apart from visual traceroute on the map, you can also see round trip time, total number of hops, etc. 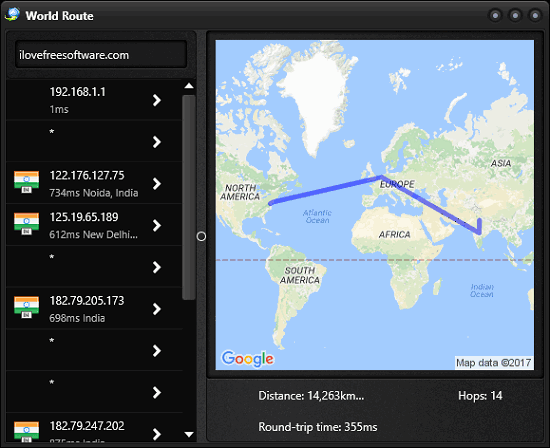 It’s fairly simple to trace route of a destination host using World Route. Just get it from the above link and then install it. When you run it, you will see its window having a text box on the top left side. Type the host name or IP address there to trace the route. Now, when the process finishes, you will see the list of all the intermediary hops in the left pane along with the country flag. And on the right side of its interface, you will see the corresponding map. The map shows the complete path that the software has chosen. See the above screenshot.

Open Visual Traceroute is another very nice visual traceroute mapper software for Windows. This software starts plotting the nodes on the map as it finds new hops in the route. Also the IP addresses of the hops found in the path are listed in a separate pane. And not only this, the software also helps you export the traceroute data to the clipboard. Or, you can also export the data to a CSV file. The software is very well polished and the globe that it uses is very interactive and supports rotating, zoom, pan like operations. And you can also take screenshot of the map and save it as PNG file. 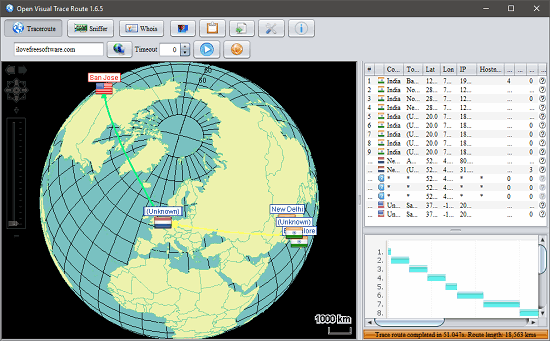 It’s very simple to use this free software. Just download and install it on your computer using the above URL and then open it up. After that, find the text box from top left corner and type the host name or its IP address to trace route. After that, hit the Enter key and it will start tracing the route. As it finds the hops in the way, it will list them and also views them on the map. And once finished, you will see the complete path to your host whose name you typed. After getting the traceroute result, you can export it to the clipboard or as a CSV file using the buttons from its toolbar. See the above screenshot.

NetInfo Trace is another free visual tracert mapper software. The software takes the domain name or IP address as an input and then start tracing the route. It will list all the hops that it finds in between the path to the destination. Also, you can see the corresponding Geo locations that it will plot on a map. And the locations are marked and joined by line to show you the actual route which is being used to reach the destination that you have entered. The software comes with an intuitive interface, and you can easily understand how to use it. 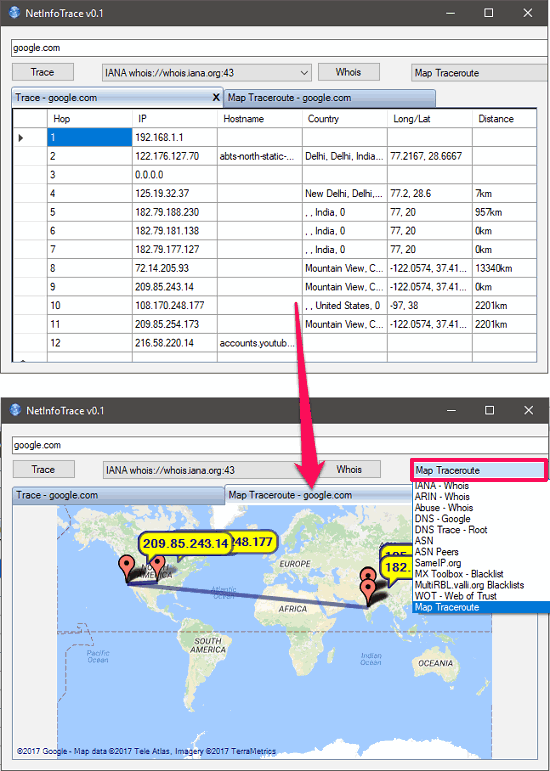 It’s pretty easy to trace a destination using NetInfo Trace. Just grab its setup file from above link and then install it on your PC. After that, open it up and in the text box which appears, type the host name or IP address and hit the Trace button. After that, it will start tracing the route and then lists all the corresponding hops. To view the location of the hops on map, navigate to the drop down next to Whois button and select Map traceroute from there. After that, the map will be marked with the locations that it has listed. And then you can do whatever you want.

In the above article, I have listed some very good visual traceroute mapper software for Windows. All of the above software worked fine and were able to show the Geo location of the hops in between the source and target destination. And I really like the fact that in some of the software, you can export the traceroute data to a file. Personally, I really like Open Visual Traceroute to be the best software in my list. Let me know which one is your favorite.