Countdown App is a completely free and simple birthday countdown app that allows you to add birthdays and keeps reminding you about the upcoming birthday. You can set the name and date of the person whose birthday is coming and the app will count down the days on your screen. A good thing about this app is that it allows you to set countdown for more than one person’s birthday. Once you set the countdown for one person, you can go ahead and set another countdown for another person.

This birthday countdown app has been designed very creatively and beautifully. A giraffe like character pops up everytime the app opens on the desktop. The creative designing of the is sure to catch eye of users, especially children. You just have to visit the link given at the end, install the software and start using it straight away. 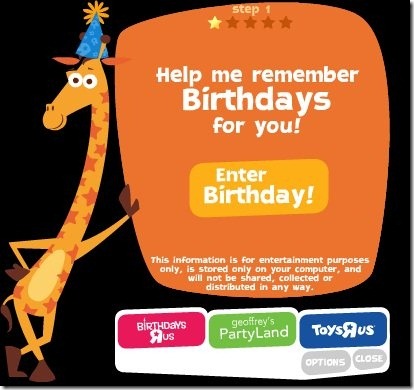 How To Use This Birthday Countdown App

This birthday countdown app follows a simple five step procedure and is very easy to download. The app requires you to have Adobe Air in order to use this app and installs it along with the app if it not available on your system. Once installed, an icon appears in the system tray which can be used to operate the app.

The first step to use this app, after installing, is to hit the Enter Birthday button given in the centre ( as can be seen in the above screenshot). In the second step, the app asks you to select whether that person is a boy or a girl. After that, you can click the next button and type the name of the person for whom you are setting the countdown. The next (fourth) and the inevitable step is to select the birth date of the person. 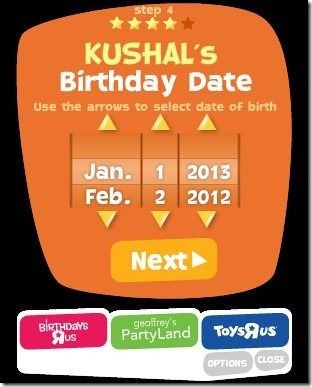 In the final step, the app asks you set the time from when you want to be reminded about the upcoming birthday. The app can activate the reminder from as soon as 8 weeks to as late as 1 week before the big day. The countdown will start appearing on your desktop accordingly. You can also choose as to whether you want the countdown to appear on desktop daily, every 2nd day, weekly or on a monthly basis. Simply hit the done button after this and your countdown is set. 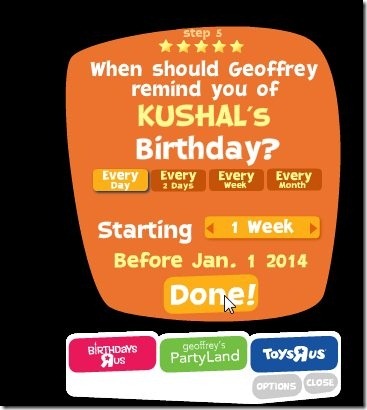 On the main day when the set event is due to take pace, the app unveils a very nicely decorated birthday cake along with the name, on the desktop. 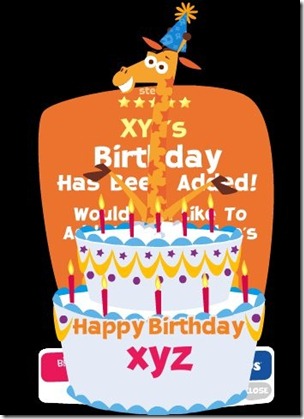 Apart from the main function, this birthday countdown software includes features that can prove to be valuable. The first such valuable feature is that this app does not restrict itself to setting just one reminder at a time. You can set reminders for more than one person. The countdown for both reminders appear simultaneously. Another good feature is that you can edit the already set reminder anytime. You can edit the settings of the set birthday. 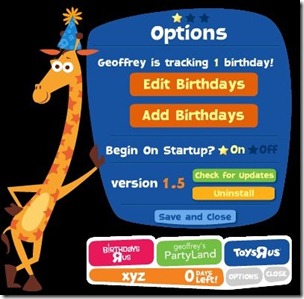 One more feature that I liked about this app is that you can manually choose when you want to run the app. The app lets you decide whether you want to automatically run the app when the system starts or not.

This birthday countdown software is a very good looking app with some nice features. I just felt that an option to set a particular time also can be added to make it more specific. Other than that, it is no doubt a very good app.

Note: The app contains two extra options on the interface (green and blue buttons) that lead you to different applications.