Backup Compare is a really nifty free software to compare contents of folders. It’s a simple to use but incredibly powerful application that performs a detailed comparison of two folders and their contents. When checking the two folders, Backup Compare initially compares different parameters of the folders’ constituent files (file names, sizes etc.) to detect any changes in both versions of the files (and hence, in the overall structure of the folders in question). Apart from that, it also checks and displays whether there are any files that exist in only one of the two folders being compared. And if no differences are found, it performs an even deeper comparison, checking the checksum MD5 hash values for any signs of data degradation.

Although Backup Compare can be essentially used for comparing the contents of any two given folders, it can come in especially handy while comparing older and newer versions of Backed up folders (probably that’s the reason it’s named like that, and refers to the folders as older and newer). That’s because it can easily check whether the files backed up have changed since the last time or not. Sounds pretty good, right? Let’s dive in, and find out more!

Although Backup Compare is a pretty capable software application as such, what makes it even more amazing is the fact that how lightweight it is. Because believe it or not, this thing is available as a standalone portable application and is a measly 356 KB in size. Isn’t that amazing? This means that there are no installations or anything else required. Simply download the executable from the homepage, and run the thing. Here’s how it looks like: 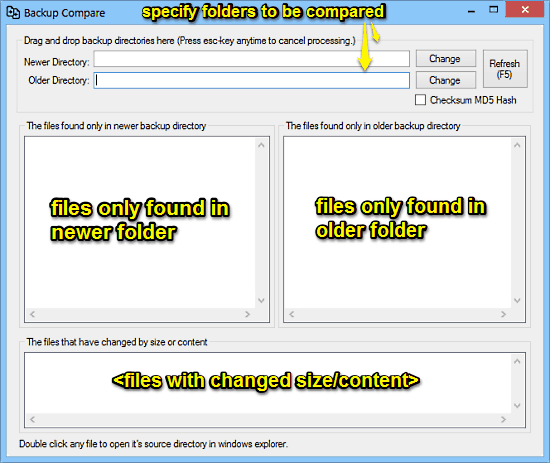 As the screenshot above makes it clear, Backup Compare has an ultra-simplistic user interface. The single window UI essentially consists of two boxes stacked side by side. The left one displays the files found only in the new folder, whereas the right one shows the files found only in the old folder. Apart from that, there’s also a third box at the bottom, which lists the files that have changed by their size or content. On the top, there are just a few buttons to specify the folders/directories to be compared, refreshing the comparison process etc. Quite simple!

How to use this free software to compare contents of folders?

Using Backup Compare to well, compare the contents of two folders (or older and newer folders, as the program calls them) is a piece of cake. All you have to do is specify the directories you want to compare, and Backup Compare will take care of the rest. Here’s the customary step by step tutorial anyway, to get you started:

Step 1: First off, you have to specify the folders whose contents you want to compare. As mentioned before, Backup Compare comes in really handy when comparing backed up folders. So let’s take that as an example. Use the Change buttons to specify the Newer Directory and Older Directory. If you want to have a detailed comparison, you can select the Checksum MD5 Hash option as well.

Step 2: That’s all there’s to it. Truly, there’s no second step. The moment you specify the new and old folders, Backup Compare instantly gets to work, comparing the two folders. In just a few moments it presents the detailed results of the comparison between the contents of the two folders. Check out the screenshot below: 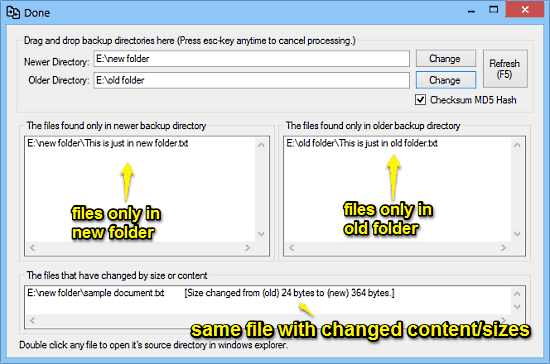 As illustrated by the above screenshot, Backup Compare provides a detailed comparison of the two folders in question, detailing three classes of compared files in the result:

Backup Compare is a useful free software to compare contents of folders. While it can be used to compare the contents of just about any two folders, it comes in as especially resourceful when it comes to comparing the changes in contents of two different versions of backed up folders. The fact that this portable application can even compare two seemingly identical files via their MD5 checksum values makes it even more amazing. Do give it a try, you’ll be glad you did.