This tutorial describes how to temporarily pause OneDrive sync in Windows 10. As I’ve stressed upon a number of times in my previous articles, Windows 10’s deeply entrenched OneDrive integration is one of its most important and powerhouse features. Native OneDrive integration automatically (though you can manually do so as well) synchronizes all your important files to the cloud instantly, directly from within the operating system.

While the automatic synchronization is immensely useful, it can also be a little bit of a network hog, especially in cases when there’s a large volume of data being backed up to the cloud continuously.

However, I’ve got some good news for you, people. Windows 10 makes it really simple to suspend the synchronization of your files to OneDrive for a while. Sounds like something you can use? Jump past the break to know how you can temporarily pause OneDrive sync in Windows 10.

How To Temporarily Pause OneDrive Sync In Windows 10?

Note: It’s possible to suspend OneDrive sync transiently from both Windows Explorer, as well as the modern style OneDrive app. Both of them are discussed below, one at a time.

Pausing the synchronization of your files to OneDrive temporarily is a straightforward task. Here’s how to get it working:

Method 1: Open up an instance of Windows Explorer. Once there, move over to the navigation pane on the left, and right-click on the OneDrive link. From the context menu that pops up, select the Pause Syncing option. That’s it! 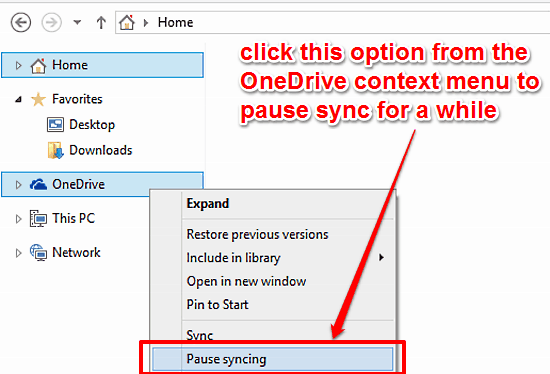 If for some reason, you don’t dig the super simple method mentioned above, there’s another way to pause OneDrive sync temporarily, as described below.

Method 2: Open the modern style OneDrive app, and click on Settings (from the app’s title bar menu). OneDrive’s settings pane should now slide out from the right. Click on Options to get to the app’s sub-options. Move down to find the option that says Sync files, and toggle it to Off. Equally simple, isn’t it? 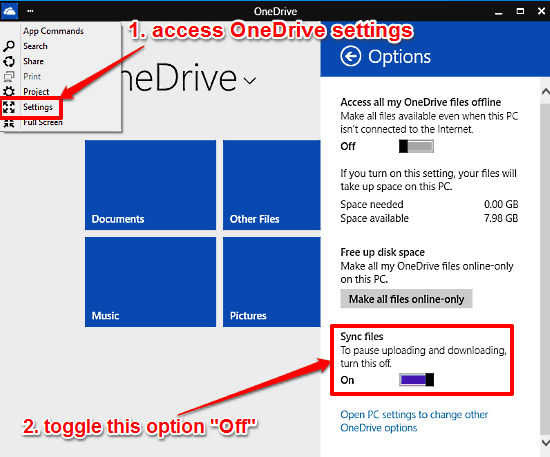 Also Check: How To Save Documents To OneDrive By Default In Windows 10?

OneDrive integration in Windows 10 makes sure that you can access your files anywhere, and everywhere. While the automated uploading of important data to the cloud does make things a lot easier, it can (and does) put a strain on the network, and in turn, general user experience. The good thing is, you can easily pause (and of course, resume) OneDrive synchronization on the fly. So give it a try, and let me know what you think of it in the comments section.