When there is a discussion about nuclear weapons, the very first thing that strikes in the minds of most of the people is its vast damage and Hiroshima and Nagasaki tragedy. Even though countries know how dangerous this weapon is, more and more nuclear bombs have been produced that can vanish cities and their populations in no time.

It’s important to know about the power of this destructive force for the common people and let’s hope atomic bombings of Hiroshima and Nagasaki were last nuclear war.

I found a website, named NUKEMAP, that help us understand what a single nuclear bomb can do.

NUKEMAP is a free website to visualize the effect of a nuclear bomb on a map. It uses Google Maps API to show how badly a nuclear weapon can affect a particular city. You will be able to see the range of overall radiation, fireball radius, air blast radius, and thermal radiation radius. Apart from this, the number of estimated fatalities and injuries are also measured after the explosion. Whether you talk about Airburst or surface burst of the nuclear bomb, this website can help you visualize the damage. 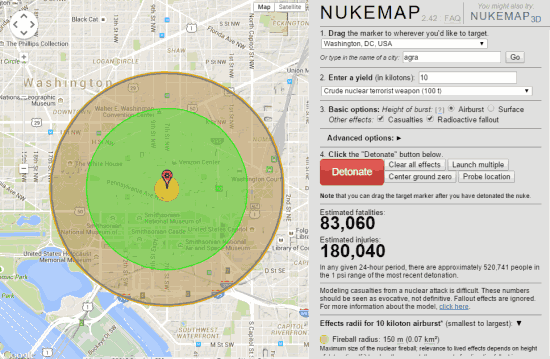 The screenshot above shows the radius of different radiations of the nuclear bomb and estimated fatalities for a particular area.

How to Visualize the Nuclear Weapon Effects on a particular City using this Free Website?

This website has provided all the options on its homepage that can help you better understand about the mass destruction by a nuclear weapon. All the options are placed at the right sidebar and rest of the area is covered with a map. You can set options like: 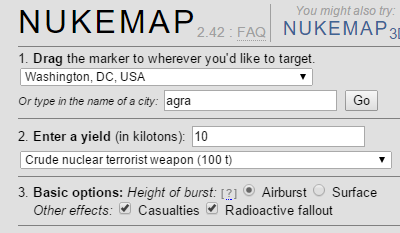 You can also explore the Advanced options like Burst height, show radiation rings, and more. 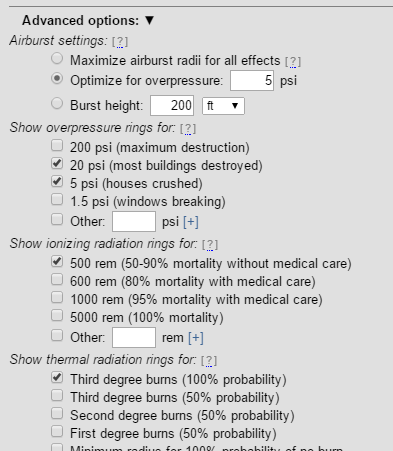 After adjusting the settings, you can press the Detonate button. After this, you will be able to see the range of the radiations of the bomb in the map. The number of casualties is calculated and shown in the sidebar.

You can also drag n drop the marker to a particular place to detect the effects.

We have also reviewed some other free websites to learn maps online.

As far as the concern is about the visualization of nuclear bomb effects, this website has done a pretty good job in that aspect. Yes, you all should check this website.