You must be aware of the fact that it takes billions of years for a solar system to form. But, did you know, you can create your own solar system online? In this article, I will tell you about these really awesome online solar system builder websites. On these websites, you can create your solar system by adding a Sun, Planets, Moons, and more. Moreover, you can also customize the Sun, Planets, and Moons according to your choice. The customization can be made in form of shape, orbit placement, color, age, type, etc. You can also share your solar system with others, and even save your progress to build it later in some of these tools. Some of these solar system maker websites are realistic with their graphics, while, some only provide dots as representation for Sun and Planets.

In the following list, you will get to know about these Solar System Creator websites in brief. You will also get to know how to create your own solar system using these tools. 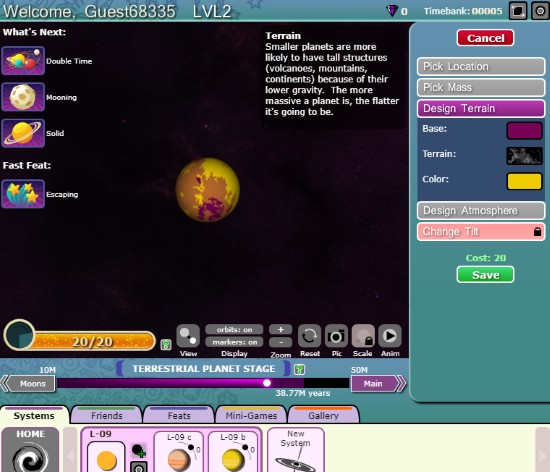 Starchitect is an extensive Solar System Builder website. Here, you can not only create your own solar system, but do a lot more. You can create multiple solar systems as well. It is basically a solar system game where you get to build your solar systems in stages. In the earlier stages, you get to create a Sun. You can decide the type of Sun you want. Later, you can create planets. For planets, you can decide orbit location, mass, terrain, atmosphere, and tilt. Every time you add a new planet, the tool checks if the system is stable. If you want, you can also add satellites to planets with custom parameters. As you progress, you move to higher levels and achievements are unlocked.

You can play as a guest or sign up for this solar system maker. But, for guest account, several features are locked. Registration is free. 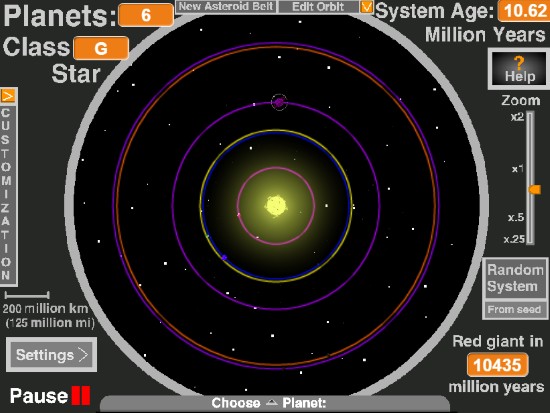 You can create solar system of your own on Scratch using Solar System Builder. It is another good option for students as well as learners. It is pretty basic tool and creating a solar system is simple here. You can begin with deciding the type of sun for the system. Now, from the Choose Planet tray, you can add planets to your system. The types of planets that you can add are: Small, Earth, Super Earth, Jupiter.

As soon as you add a planet, it starts revolving along its axis around the Sun. You can carry out various planet specific customization. This tool also detects collision, making it a bit realistic.

Do note that you cannot save your solar system to access or make changes later. On comparison terms with Starchitect, its not as advanced, but does the job. 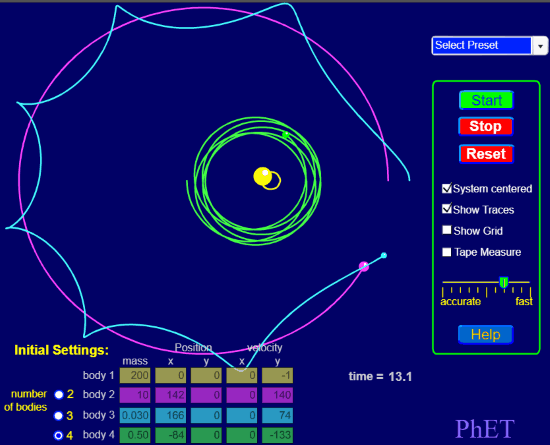 My Solar System is a simplistic solar system builder website. Here, you can add upto 4 bodies in your solar system. For each body, you can set their mass, position, and velocity. After setting up the values, proceed with simulating the system. The orbit traces are displayed as the planets move. This will help you understand the concept of planetary movement. You can also increase or decrease speed of overall solar system.

You can also checkout Super Planet Crash, which is an online solar system based game.

These are some of the best online solar system maker websites. These not only let you create your own solar system, but also provide good idea about planetary motion.