Here are 2 free online animated PNG compressors. These free APNG compressor websites optimize your APNG image without affecting the quality of that image. There will a color reduction in the output animated PNG files, but you won’t be able to see the difference between original and output APNG image.

When you have to get the output animated PNG, you can use Google Chrome, Firefox, or some other animated PNG viewer tool to check the output. 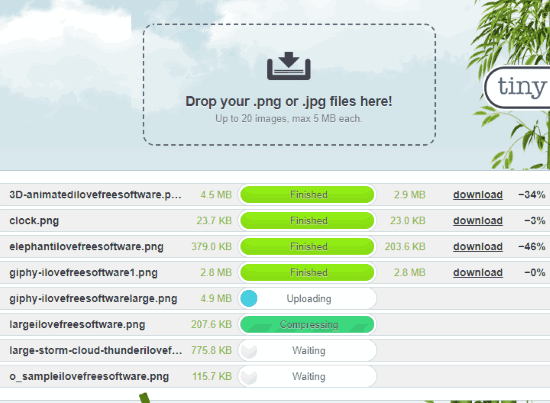 TinyPNG is my favorite online animated PNG compressor. It can batch convert APNG images, which is its advantage over another animated PNG optimizer. Also, the compressor process is quite good. I was able to compress APNG images up to 46%. This website can also compress still PNG images.

In its free version, you can optimize 20 APNG images at a time. Also, the maximum size for a single APNG image is 5 MB, which I think is sufficient.

After uploading the APNG images, it starts compressing those images one by one. The size of original and output APNG image is also visible side by side. Also, for each individual APNG image, its show the compression percentage. It is really a very good APNG optimizer website. 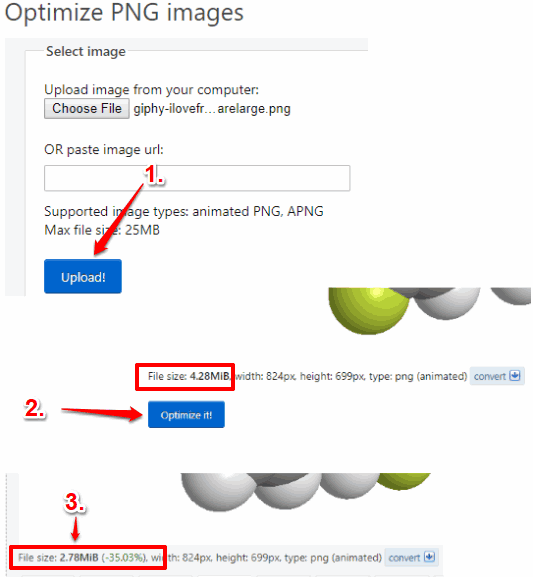 You can upload an online animated PNG or an APNG image from PC. Only one APNG image can be optimized at a time and maximum size for a single APNG file is 25 MB.

The optimization process is straightforward. After uploading your APNG image, you can click Optimize it! button and then it will process the input image to generate the output APNG. You will also be able to see the size of input and output image. Also, it shows the total number of compression (in percentage) after the optimization.

Among these free online animated PNG compressor websites, I prefer TinyPNG. I like its feature to batch compress APNG files and compression level is also very good. If you guys know about some other animated PNG optimizer website that you want me to include in this list, then feel free to share it via comments.