Those who are unaware of FIFA 15 Ulitmate Team mode, then it’s the mode in which you have to create your dream team by buying best players from different parts of world or by taking them on loan. You can then play matches with your FIFA 15 Ultimate Team against best teams of world to climb up the ladder and claim to be the best.

Apart from this, you can choose your favorite club to play its league match along with 3 other major matches each and every week which are chosen from the real world league schedule. 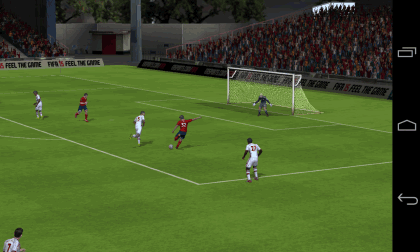 On launching the FIFA 15 Ultimate Team, the first step is to choose the region you want to follow. You can choose from different regions like England, Germany, etc.. After choosing the region, you are given a team consisting of different players across the world. You have to build up and make your squad stronger by buying/selling players. You can also get players on loan for specific matches.

The Home section of the game lets you check your Squad, Season you are playing, Active Objects, and New Pack Offers. 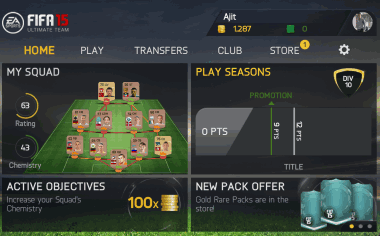 The Squad option lets you check and manage squad.  You can change your team formation, check team rating, check team chemistry, and change squad view type. You can also tap on any player name to know more about him like his bio, or to swap it with other players. 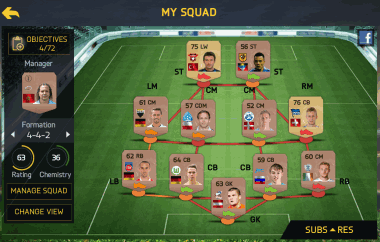 The Season options are for checking your progress in the current season of the tournament you are playing in. You can also choose to play the next game of the season from here. For playing the game, either you can play the match yourself or simply simulate it. 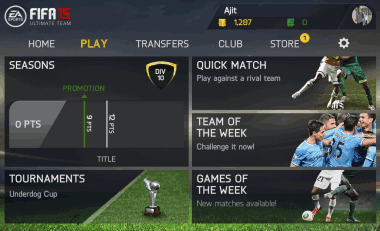 This section is for visiting the Transfer Market from where you can buy and sell players to build up your squad. You can search for player to buy using different selection criteria to get the specific player. You can also use this market to buy support staff for your team as well. 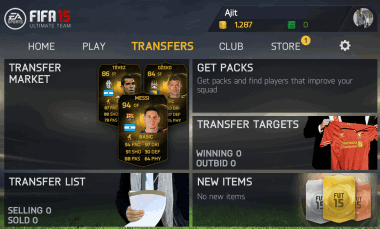 From this section, you can check different aspects of your club like list of all players, staff members, consumables, club items, etc.. You can also check your transfers from this section. 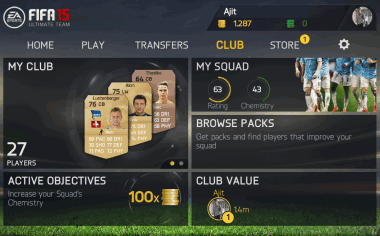 This is the Store from where you can get extra add-ons for your club to make it more cooler and strong. It includes Packs which includes great players and various other premium stuff. You can get them via FIFA coins or using in-app purchases.

You may also like: FIFA 14 Official FIFA Game for iPhone.

FIFA 15 Ultimate Team is the ultimate soccer game for Android just like it predecessors. It definitely continues the legacy of FIFA franchise and takes it one step ahead. Its a must try for all FIFA and soccer game lovers.