The app is paid and cost $4.99 but you can download the fully functional 30 day free trial version of the app. We normally never review paid apps, we are all about free software and alternatives. But once in a while a software comes along that enables you to do some really cool thing or is quite useful, then we are tempted to write about paid application as well. ModernMix is just such a kind of app that we would recommend to people who are using Windows 8 and are annoyed by the start screen and the inability to run modern apps on the desktop. 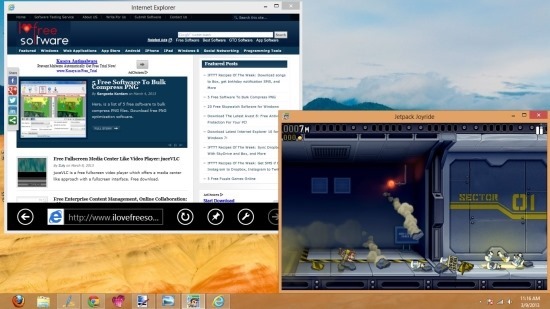 Some of the metro apps in Windows 8 are quite fun even if you hate the modern interface of the Windows 8; the metro or modern apps are quite slick-looking and cool.

But when we run modern apps, most of us have some simple complaints as stated below. These little problems makes the Windows 8 experience suck a little bit.

Now if you like modern apps and would like to avoid the mess that they create as stated above than try out ModernMix by StarDock. Also you can download Pokki which give you a start menu in Windows 8 and with these two application you can avoid the annoying Windows 8 start screen all together.

Downloading and configuring ModernMix for Windows 8: 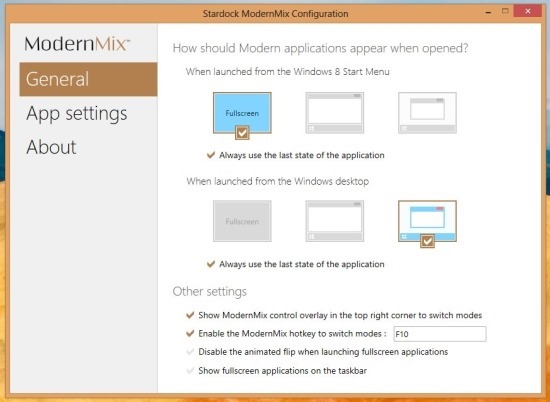 Now let’s configure the app according to your needs. The first thing that the we want to do is configure what happens when you open up a Windows 8 app from the start menu and what happens when you open up the app from the desktop. In each of these situations, you are offered 3 choices: you can go fullscreen, windowed,  maximized windowed.  And also you are allowed to decide what the hot key will be that will enable you to switch between the fullscreen and windowed mode with just a keypress.

How to use ModernMix for Windows 8:

When you launch the app:

When you launch an app In Windows 8 depending how you configured MordernMix, it will launch the modern app in desktop mode, fullscreen, or full windowed mode. To switch between the fullscreen and windowed mode just press the hotkey which will be the “F10 button” by default.

Pin modern app to the taskbar: 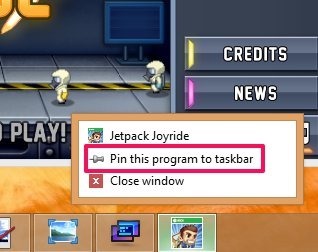 To pin a metro app in Windows 8 all you have to do is right-click on the taskbar icon of app that you want to pin and you will have the menu in front of you as shown above in the screenshot. Now just click on the pin this program option as high-lighted above. 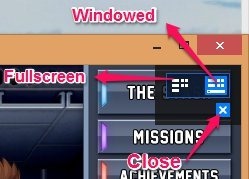 When you are running any app then you will have a small option menu in the upper right corner of the app window. This menu provides you with simple controls like making the app fullscreen, closing the running app, and running app in windowed mode if you are in fullscreen. What each of the menu items does is aptly explained in the screenshot above.

This application is currently the only app on the market that allows you to run Windows 8 metro apps on the desktop. The best part about this app is it is extremely simple to use and setup. ModernMix allows you to enjoy the modern app without enduring the horrible and irritating modern interface of Windows 8.