This tutorial explains how to remind yourself to take out pendrive from public PC. Here I will talk about a free software, Removable Drive Reminder. While this software is running, you will not be able to shut down your PC or sign out. It will keep preventing Windows from shutting down PC and it will hold it for 30 seconds. It will show an alert on the screen and will play a sound too. And in the meantime, you can take out the pendrive from PC. And the best part about this software is that it can run from the flash drive itself that you are using on someone else’s PC.

Removable Drive Reminder is a simple software that keeps running in the background. And if there is a removable drive still plugged in, it will monitor that. And if you try to log off or shut down PC without removing the pendrive, then it will show you an alert for 30 seconds. In that time period, you can remove the pendrive. Also, you can mention which drives letters to ignore while the software is running. With the help of this software you will never leave your flash drive if you are using someone’s PC. 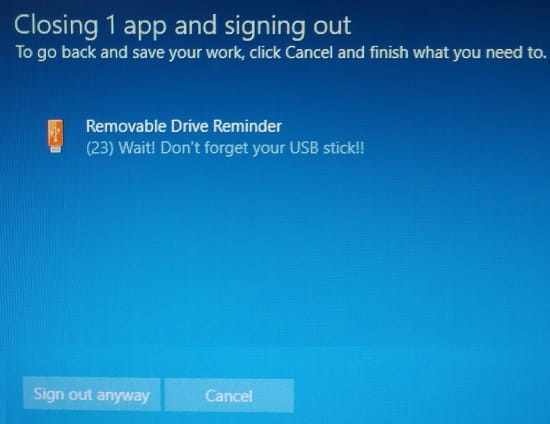 How to Remind Yourself to Take Out Pendrive from Public PC?

Removable Drive Reminder is an open software to remind you take out your flash drive. It simply keeps running in the system tray and you can also opt to play a sound alert when you shut down PC or sign out your session. It needs just a few simple steps to configure the software and it will keep working afterward.

Step 1: You can either run this software as a standalone tool. Or, you can run its executable from the pendrive itself that you are using.

Step 2: Add the drive letters of the drives that you don’t want it to monitor. Also, you can opt to play alerts sound when you shut down or sign out from the PC. You can open and use the “Configuration” window of the tool to configure it. 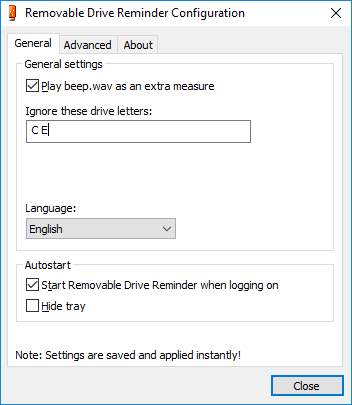 Now, save the changes and let the software run in the system tray. If the pen drive is still plugged in and you try to log out of the PC or shut it down, then you will see an alert like the one I have shown in the beginning of this article.

Removable Drive Reminder is a very nice utility for people who often forget their pen drives. This tool does what it says and as long as you use it, you will never forget your pen drive after working on someone else’s PC. If you are one of those who often forgets to remove the flash drive, then you can give this tool a try.