Paperama – Paper Folding Origami is a free Origami app for iPad to solve Origami puzzles. The app consists of 72 unique Origami puzzles which you need to solve. All the 72 puzzles are divided to into 3 sections: Beginner, Normal, and Hard; with each of them having 24 puzzles. Each of the puzzles consist of a shape which you need to make using Origami using limited number of folds. The app has 3D folding effects, which give a realistic experience of folding a real paper.

While playing game, you can do unlimited numbers of Undo. When you have solved the puzzle, then app rewards you with points, which are given to you on the basis of closeness of shape made by you with the given shape. You can play unlocked puzzles any number of times, even after you have completed it. For locked ones, you need to clear all previous puzzle to unlock them. The app also has Hints feature to help you in solving difficult puzzles, but all hints are part of paid add-ons. 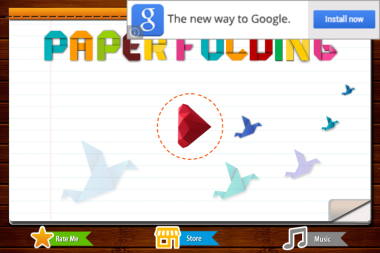 How to Use this Origami App for iPad:

It is very easy to use Paperama – Paper Folding Origami app. When you launch the app, you will see a White screen with a Play icon in the center. You need to tap on the icon to proceed further. On next screen, you have to select your preferred level: Beginner, Normal, and Hard. If you are using the app for the first time, then only Beginner level will be unlocked while Normal can be unlocked once you clear the Beginner level. Similarly, Hard level will be unlocked when Normal level gets cleared. 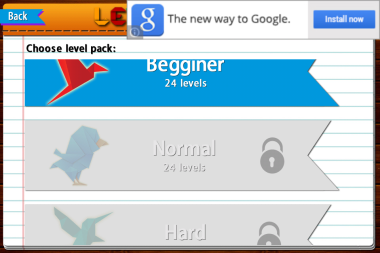 On selecting the level, you will see that it has 24 puzzles for you to solve. You will start from puzzle 1 and will proceed further as you clear the puzzles. 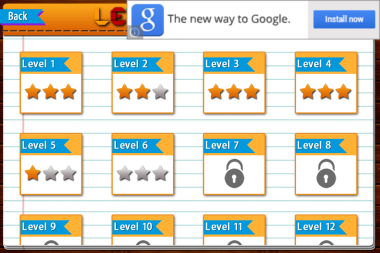 Each of the puzzle has a specific name which you can view at top. On the center of the screen, you can see that there is a paper with a shape drawn at its center. Your aim is to fold the paper in such a way that it transforms to the given shape. The catch is that app provides you with a limited number of folds. 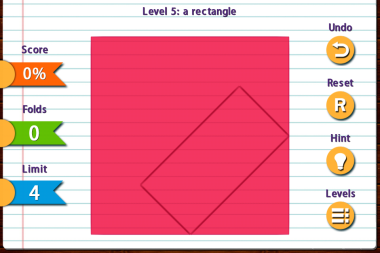 You can check the number of limited folds, and the number of folds done by you on the left side. You will see that there is also an option displaying the percentage. This is that percentage of your folded shape that resembles the final shape that you have to make. To clear a level, you need to have more than 80 % of area covered. 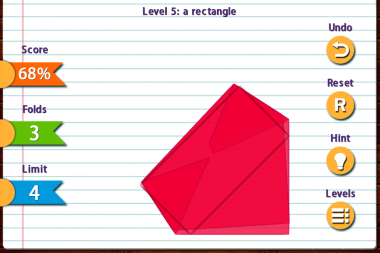 As I said earlier, the number of folds are limited, but there is no need to panic. The app offers you unlimited number of Undo, which you can use to make the correct shape. There is also an option called Reset which you can use to start from scratch. If you are still finding it difficult to clear any puzzle then you can also take help of Hints, but remember, it’s a paid feature. 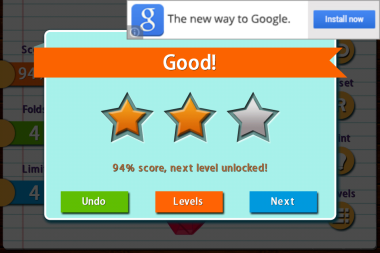 If you find the app too difficult, then probably you first need to brush up your Origami skills. For that, you should try iPhone Origami App To Learn Paper Folding Lessons and 5 Free Websites to Learn Origami.

Paperama – Paper Folding Origami is a really cool Origami app for iPad for solving Origami puzzles. All the puzzles are really awesome, but what makes this app stand apart from others is: 3D folding effects. While using the app, you will definitely feel like folding a real paper. So, if you are  an Origami fan, then do try this app for sure.