Dhingana is a Free Music Streaming App for iPad, iPhone, iPod Touch, Android that allows you to stream and play music for free. It is a perfect app for those who are too lazy to download the music. Or for those who find it difficult to download old songs. The app is primarily meant for users in India.

Dhingana, is a straightforwardard and uncluttered app. The app streams music faster, searches songs easily, creates playlist for you.

The collection of songs with Dhingana is huge. The app is known for the collection of Bollywood songs, but Ghazals, Folk Songs, English, Regional songs are also available. A cool feature of the Dhingana app is the playlist that a user can create or choose from already available ones. The staff of the Dhingana uploads various playlists with songs that can be played at will. Not only that, there is a huge list of the in vogue songs, which also eases the job. Also, the Radio feature which automatically sorts songs certainly helps a lot. The recently introduced, non-stop radio feature also adds to the popularity of the app.

How to Stream Songs for Free with Dhingana Music App:

There is nothing actually that you need to know on using the app. It is pretty simple.

Also check out other free music streaming apps for iPad and Android. 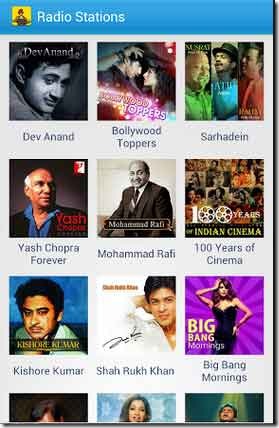 Despite, a few negatives the Dhingana App, it is a great app for playing music on the Apple devices & Android devices. Its user-friendliness, simplicity, wide collection, faster streaming makes it a must have music app. Certainly, other apps pose competition to Dhingana like Hungama but the loaded features make Dhingana a must have app.