Earlier we talked about some MP3 players that are less than 1 MB in size. That was pretty interesting. That give me an idea to see if there are some music players out there that don’t even have any traditional interface. The idea seemed crazy, but guess what, I was able to find 4 such MP3 players, and all are completely free! I really don’t know what would be the need for such players; maybe to save screen real estate. Whatever the case may be, it definitely might be worth to try these out once. 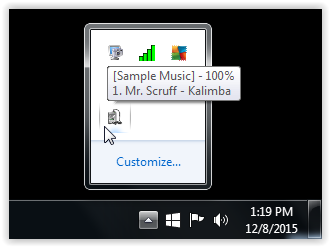 Stealth Player is an open source music player that lacks a user interface. It also takes less hard drive space and memory. This music application works on the basis of hotkeys. The only visual element it offers is the system tray icon.  It supports playlists and provides options to loop through them too. To play a song or a list of songs, all you have to do is right-click the folder of the song and select ‘Open in Stealth Player’. Make sure you have launched ‘StealthReg’ once, which integrates that option to the drop down menu. The songs can be navigated through the numpad hotkeys. This application can play audio files like MP3, MP2, MP1, OGG, XM, S3M, MTM, MOD etc. You can also configure it to play the Internet Radio using the command prompt. If you want an Internet Radio player for that specific purpose then you can check them out Internet radio players here. Another awesome feature of this product is that it can configure your system to control Stealth Player with your phone as a remote through Bluetooth. The only drawback I found is that its options can only be toggled from its parameters file and not with a right-click on the tray icon. 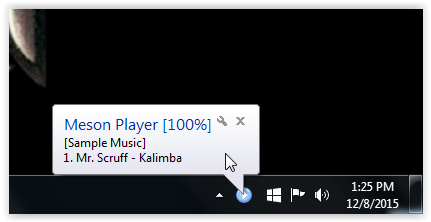 Meson Player is another lightweight and interface-free music player. This music player offers you a smooth experience of music playback without you putting effort to interact with it, unlike GUI based music players. It is available on Linux and Mac, apart from Windows. To run Meson Player, right-click a folder with music files and click ‘open in Meson Player’. The music will start playing with a little system tray icon. Meson Player, unlike some in this list, provides you the option to toggle hotkey and other options with a simple right-click. It provides you choices for looping the playlist, adding a playlist, saving a playlist etc. This music player supports scrobbling which adds your playback behavior to Last.FM, which is a charm for audiophiles like me. It can also play Internet Radio but does not support their playlists. You can customise its playback with the command prompt.

Windows Play is a very simple AutoHotKey based music player that can only play MP3 files. Like the others in the list, this music player also runs in the background and exists as a system tray icon. Windows Play also happens to be a very small application and consumes less memory, like these lightweight audio players. It is, however, a bit obsolete than its counterparts as it doesn’t support playlists. After launching this music player application, you have to press Ctrl+P whenever you select an MP3 file to play. This becomes bothersome if you have to switch tabs always while doing your work. I would recommend using this application if you have no problem hitting Ctrl+P every time you want to play a new song. If you’re interested in the application of AutoHotKey then click here. 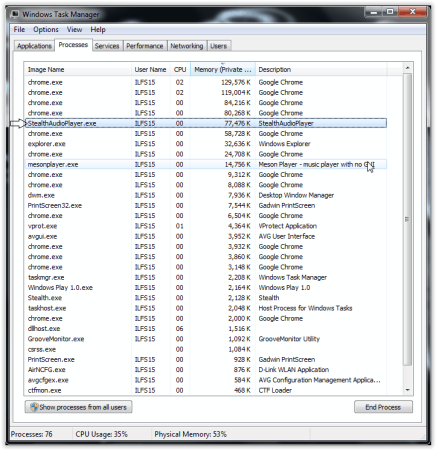 StealthAudioPlayer is described by its developer as a ‘minimalist’ audio player which does not have an Interface. Other than that, you also can’t interact with it through a command prompt. I would describe this GUI-less audio player as the king among its kind because it supports lossless audio formats, unlike others. It supports a wide range of audio file formats. This awesome application also supports ASIO drivers for low-latency and high fidelity audio signals. It also supports WASAPI. This audio player has no visual output, not even a system tray icon as the others in this list have. To run a MP3 file, right-click on it and choose “StealthAudioPlayer Play”. I was surprised when I saw I could drag and drop music files to its exe file, and add them to a playlist, which none of the other no-interface music players have. This audio player does not work on the basis of hotkeys but bat files which perform the play, pause, forward, etc navigation options. I definitely recommend you guys to try out this awesome audio playing software!

All of these music players are one of their kind for providing GUI-less experience. But the one I enjoyed most is StealthAudioPlayer. It is really a robust music player that has all the basic functions that a normal GUI-intensive music player has. And on top of that you get support for FLAC and ape formats with ASIO settings. The one that failed to catch my attention was Windows Play as the developer could have expanded the project to do more things. I also happened to check on the memory of these audio players and saw that Stealth Player uses the least RAM while StealthAudioPlayer uses the most. So choose wisely!

Why would you use such a music player? Let me know in the comments below.