avast Mobile Security comes with multiple options to smartly secure your Android. The best part of this Android antivirus app is its anti-theft option.

Once you enable anti-theft feature of avast Mobile Security, it will become very difficult for some phone thief to use your phone if he steals it. avast locks up your phone as soon as a new SIM card other than the registered SIM card is inserted in your Android phone. avast registers your SIM Card with your phone’s IMEI number when you first time set the anti-theft settings in the app. In case you are the one who wanted to change the SIM, you can specify your secret password to unlock your phone.

Also, the antivirus sends you a SMS on the alternate numbers that you set while configuring anti-theft feature on Android. The SMS is sent with the new SIM Card that is inserted in your stolen Android phone. So, you immediately come to know which phone number is being used with your Android phone. You can just give that number to cops, and find out about the person who stole your phone.

The app even plays a siren sound or the custom sound set when a new SIM card is inserted. So your phone is reasonably safe with this smart avast anti-virus app. Of course, advanced thieves would have options to get around this anti-theft app as well, like, how about reinstalling the whole Android OS? 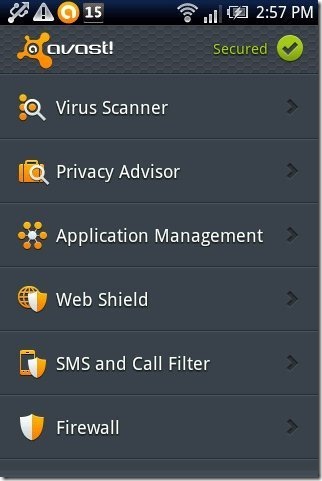 Check out Netqin security and antivirus for Android reviewed by us.

Take a look on AVG Android Antivirus app reviewed by us.