What Are User Accounts And User Groups In Windows?

The best way to placate the confusion surrounding these two terms is to see what they are, one by one. So let’s take a look at both User Accounts and User Groups, one at a time:

I’m sure almost every Windows user out there has heard this term at some point or another. In the simplest of terms, a User Account is basically a digital account for the user to log-in and use a Windows based system. Each User Account has an identifying Username and authenticating Password. These credentials need to be entered at the login screen in order to gain access to the connected User Account. Each User Account has its own set of parameters such as a user profile, application settings, user-specific data, security privileges, and file system access permissions.

Since the time of Windows XP, almost all of the Windows operating systems have been highly multi-user type, and they keep getting better with each subsequent revision (with the latest being Windows 10). Modern versions of Windows have three basic types of user accounts, as described below:

Apart from that, there’s also a Guest Account, that can be used to provide others temporary access to the computer, without the need to create an additional user profile and accompanying files. You can see a listing of all the User Accounts in Windows, along with their types in the User Accounts sub-module of the Windows Control Panel. 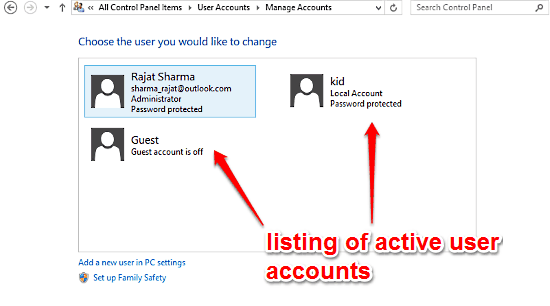 While I’m pretty certain that almost everyone has heard about User Accounts, the same can’t be said about User Groups. The reason is simple: even though they are related to users and how they are managed in a Windows OS, User Groups aren’t the same as User Accounts. As a matter of fact, a User Group is a superset of User Accounts. This means that every user account (administrator, standard or child) is in essence, a member of a user group. A user group can have multiple user accounts and of course, one user account can be a member of multiple user groups. User groups can come in really handy, especially in cases when it comes to applying bulk permissions to a number of users accounts, because a set of permissions applied to a user group automatically gets applied to all the user accounts that are members of it. There are a number of user groups in Windows, such as Administrators, Backup Operators, Power Users etc.

To access the listing of all the User Groups in Windows and tweak their settings, head over to the Local Users and Groups section of the Computer Management module. 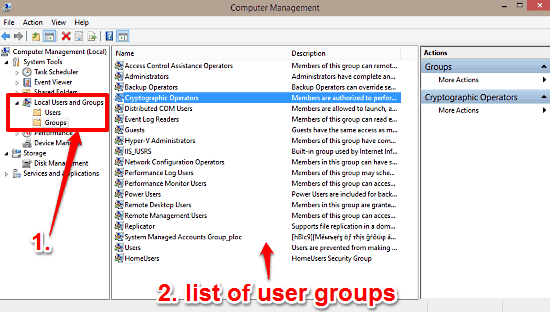 Also Check Out: Various Types Of User Accounts In Windows 8

User Accounts and User Groups are often confused with each other, mostly on account of the fact that they are similar sounding. However, User Accounts are merely a part of User Groups. While the former refers to the set of credentials, settings etc. used to login to Windows, the latter includes the broader set that includes multiple user accounts.