Exe to Msi Converter Free is a free software that lets you easily convert “.exe” files to “.msi”. It’s a simple and easy to use tool designed to help you create an MSI (Windows Installation Package) file for an EXE (Setup Executable) present on your system.

Both of these files helps in installing application programs on your system, however, there’s a significant difference between them.

An EXE is just the executable that installs programs on Windows and helps in adding data and value to the system, but doesn’t helps in maintaining its integrity. An MSI, on the other hand, is an executable that not only helps in a clean program installation, but also in a clean uninstalltion and helps in restoring back the system stability. In short, an MSI file is a file that installs or uninstalls a program, and is capable of repairing it if it finds some files missing or corrupted. Another advantage of using MSI’s is that they can  easily be redistributed and installed on other PCs. Therefore, it’s always advisable to go for an MSI file if you have an option between both of these file types.

Exe to Msi Converter Free is a handy app that lets you easily convert EXE files into MSI’s. It is available as a freeware and can be downloaded using the link given at the end of this article. After installing this app in your system, you can easily convert any EXE file to MSI and maintain system integrity. 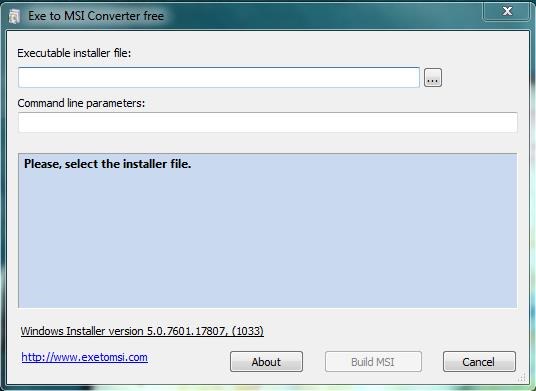 Convert EXE to MSI with Exe to Msi Converter Free:

Exe to Msi Converter Free is a simple tool that lists two options to choose an executable and enter command line parameters for the file, on the main interface. Most of the program downloads comes as an executable, so you can easily browse EXE files from your “Downloads” folder. 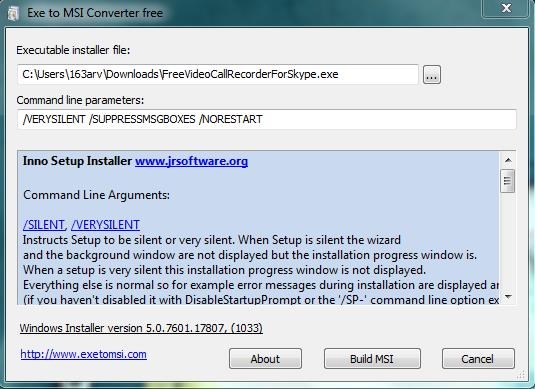 Once you choose the file, you can add command line parameters for it (Exe to Msi Converter Free automatically detect these parameters for most of the EXE installation files). When you are done, you can press “Build MSI” button at the bottom to create an MSI corresponding to the selected EXE file. 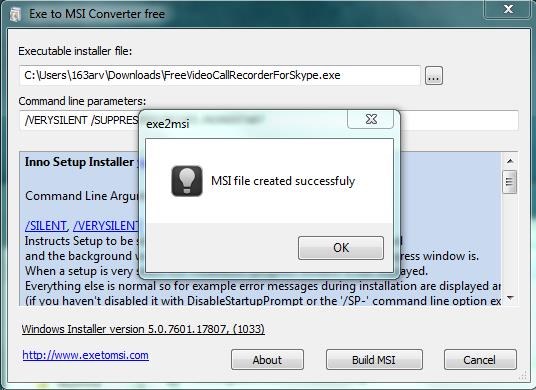 Exe to Msi Converter Free quickly perform the file creation and saves the output MSI into the source directory.

Also check out 10 best free alternatives to Winzip and Winrar, and 6 best free Archivers for Mac.

Exe to Msi Converter Free is a useful tool to convert EXE files to MSI’s. It’s extremely simple and easy to use, though it would have been better if it had provided drag and drop support for adding files and batch file processing capabilities.