Have you ever seen a YouTube tutorial video in which the guy in the video uses notepad to interact with the viewers?  While making a Youtube tutorial video, for some reasons (like no microphones or shyness), many use the default notepad, which is the most viable and simplest way to convey the instructions! However, it sometimes gets annoying while you are watching a long/short tutorial and the guy in the video keeps fumbling with the notepad! It is very much distracting and looks unprofessional too!

Utube Pad has been developed to solve this problem. This notepad is especially designed for using in How To and Tutorial videos of Youtube. While there are many other notepad replacement software , Utube Pad is unique due to the fact that it was developed mainly for YouTube videos and that it offers some useful features like text defaults, screen capture, zoom in/out, and customizable UI. It also has all the normal functions like cut/copy/paste, font setting, etc. So, you can also use this as a normal notepad.

Utube Pad is a very small program that comes as a portable executable file. It  has a very simple looking interface. In fact, it looks like the modern version of Windows default notepad, albeit different. So lets see the defining characters of Utube Pad, which sets it apart from normal notepads:

Default texts: Utube Pad offers a set of default texts messages, which are quick pre-typed phrases commonly used in tutorial videos. This feature will save you, and the viewer, a lot of time, because all you have to do is select the appropriate message to display! Unfortunately, it does not give an option to add our own text. 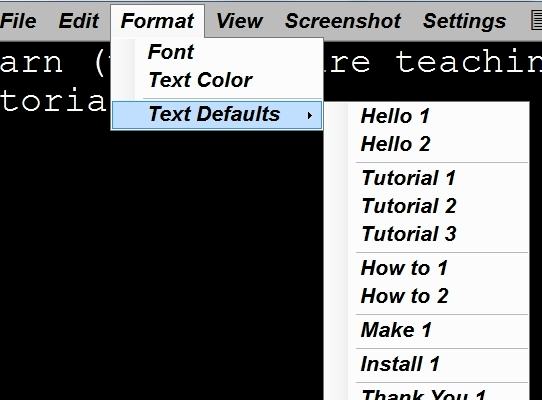 Screen Capture: It also has a screen capture feature which helps you take screenshots. However, this feature is crude and not convenient to use. Nonetheless, it is safe to say that it is the only notepad app that I know of with screen capture capability!

Highly Customizable: While the default notepad is rigid with no room for customization, Utube Pad lets you completely change the look of its interface. With a highly customizable UI, you can change font colors, background color, menu bar color, etc. Utube Pad also includes 15 themes to choose from! 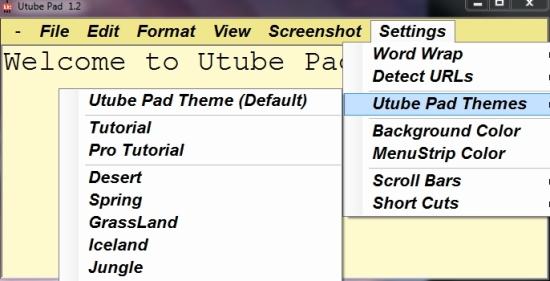 Other salient features of Utube Pad:

Utube Pad is a free and simple-to-use notepad, especially designed to use in YouTube tutorials and how to videos. With additional features like text deafults and custom themes, Utube Pad makes a better substitute for the default Windows Notepad. If you are making a YouTube tutorial and your microphone is not working or simply don’t want to record your voice, give Utube Pad a try, and do let us know about your experience in the comment section below.