Audio Monster Player is an awesome free audio player. Lightweight and easy to use, Audio Monster Player supports most popular audio formats (MP3, AAC, FLAC, OGG, WAV etc.). Apart from that, it also has a bunch of nifty audio processing goodies like dynamic virtual surround sound, DSP based audio effects, and a 21 band equalizer with presets. You can also control the pitch of the song being played in real-time. Audio Monster Player also features a unique 3D audio simulation that can alter sound output by changing the position of the sound source with respect to the listening environment. In addition to that, it has all the standard playlist features, and also supports streaming Internet Radio.

Though not as polished as other audio players, like the eye-candy GOM Audio, Audio Monster is pretty cool on its own. Sounds like something your music library could use? Let’s meet Audio Monster, after the break. 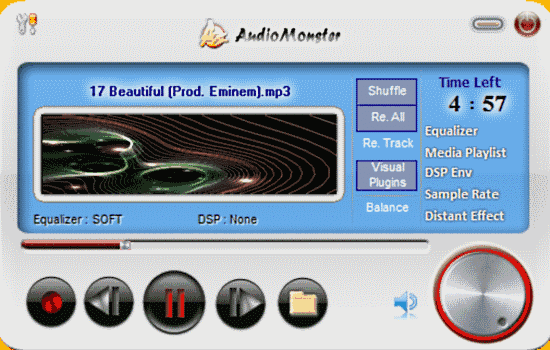 The installation of Audio Monster player is a pretty routine affair. Head over to the homepage, download the installer, install it, and you’re good to go. Here’s how the main user interface looks like: 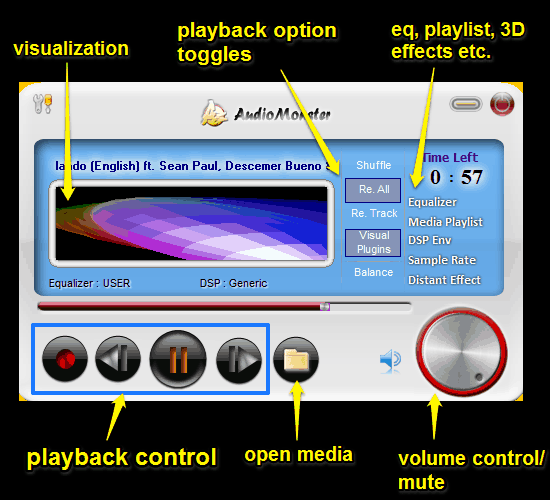 Pretty simple, don’t you think? As illustrated by the above screenshot, Audio Monster Player features a simple and straightforward (but not unintuitive) user interface. The main display features a small visualization window (which can be changed and toggled fullscreen using right click options), and standard information like track name and remaining playback time. There are also simple textual toggles for features like shuffle, track/playlist repeat, sound balance and visual plugins. Apart from that, there are also a couple of options which when clicked, launch certain sub-modules. These are briefly mentioned below:

In addition to this, there’s the standard set of playback control buttons (play, pause etc.), along with a seek bar and volume controls. Pretty standard stuff!

How to use this Free Audio Player?

Using Audio Monster Player to listen to your music is just like using any other audio player software, i.e. ridiculously easy. All you have to do is open up the playlist editor, and click the Add button to scan a particular file/folder for music files. Once found, the music files are added to an automatically generated playlist. Double click any track to start playing. Audio Monster Player supports all major audio formats, (e.g. MP3, FLAC, OGG, WAV & AAC) and You can save and delete playlists as well. In addition, you can also use the audio processing tools (equalizer, DSP effects etc.) to tune the music output to your liking. 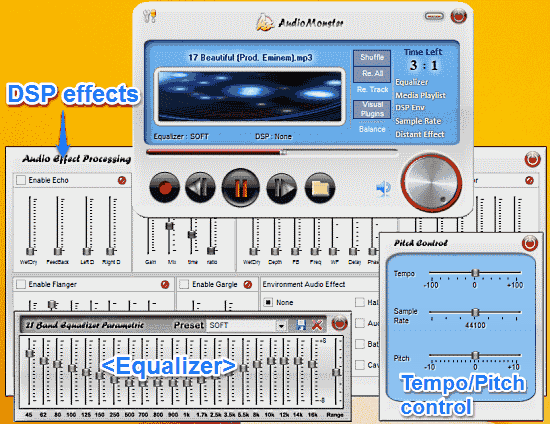 One of the coolest features of Audio Monster player is its built in 3D sound simulation sub-module. This feature simulates the listener as being in the center of a room, and lets you vary the sound output by virtually altering the placement of sound source (e.g. speakers) with respect to the listener. The 3D audio simulation settings pane can be brought up by selecting the Distant Effect option from the main display. Here’s how it looks like: 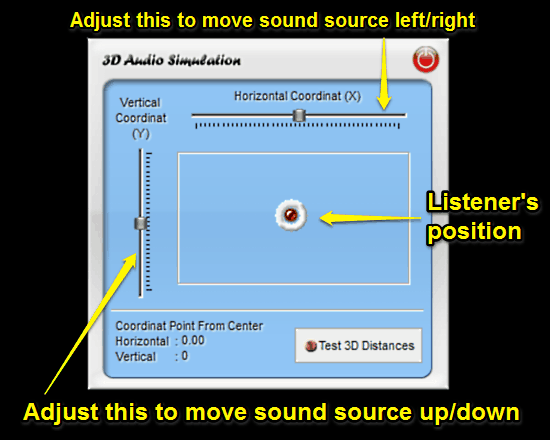 As illustrated by the above screenshot, the 3D Audio Simulation sub-module has two adjustment sliders, with respect to the listener’s position a virtual audio listening environment (e.g. a room). The slider with the X (horizontal) co-ordinate lets you move the sound source to left/right, whereas the Y (vertical) coordinate slider lets you move the sound source up/down. Experiment with different combinations of sliders’ positions to generate some really 3D sound effects. The changes effected by altering the slider positions can be heard real-time.

How to Play Streaming Internet Radio via Audio Monster? 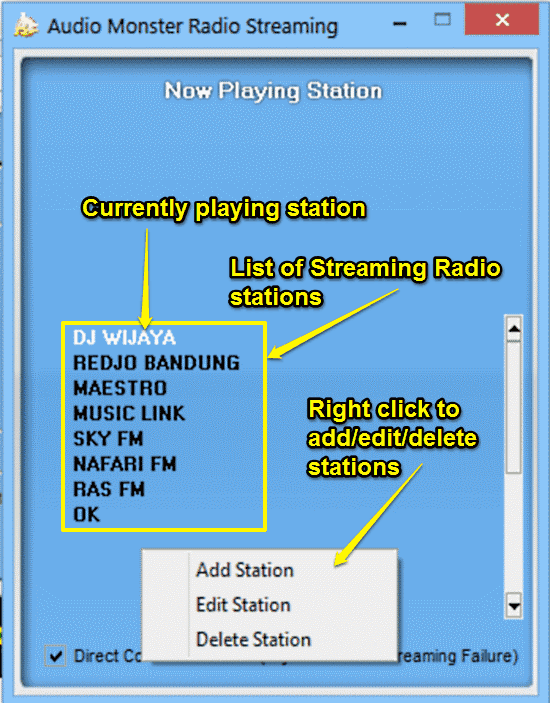 Audio Monster Player is an incredible free audio player. Apart from having all standard audio playback and management features, it also features Internet Radio streaming, and a couple of cool audio-processing effects. Then there’s the 3D Audio Simulation, which makes for some really cool sound effects. Although the user interface is a bit simple compared to other similar software, but Audio Monster Player more than makes up for it by its feature set. Give this one a try, and let me know your thoughts in the comments section below.