3D Bowling Game (Powered by WebGL) is a free Google Chrome 3D Bowling Game Extension. It is freely available under the Role-Playing & Strategy category of the Chrome Web Store. In the game, you have to play as a drunken ape who has accidently left his wallet at home. He has to win the game in order to pay his bills. On winning, he can earn a huge load of money. Other people are also present in the bar. They frequently would throw away their bottles and other stuff on the bowling alley. You, as the ape, have to bowl, keeping the ball away from these obstacles. 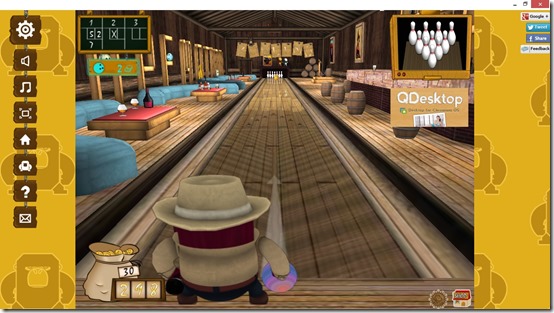 You need to be connected to internet to play this Bowling game in Chrome; it doesn’t work offline.

Let’s get you some idea about this Bowling extension for Chrome.

As you launch this Bowling Game extension for Chrome, the game will start in a separate Window. 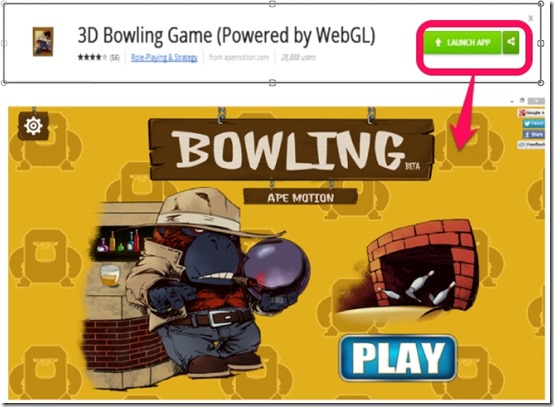 As you start playing this Bowling Game, firstly the map will open up in front of you from where you have to select the location to start playing. As you play the game for the first time, only one location would be unlocked and available for you to start the game. Depending on the coins you collect during the game, new locations to play would be enabled.

Now, as you start, the options for changing the settings of the game will be shown to you on the top left corner of the game area. A TV like icon would be present slightly above the alley, where you can see the preview of the bowling pins.

To bowl, you have to take the cursor to the ball. There, it will turn to a hand icon, and after that you can bowl. You can move the ape to right or left side so as to adjust the position of the ball. 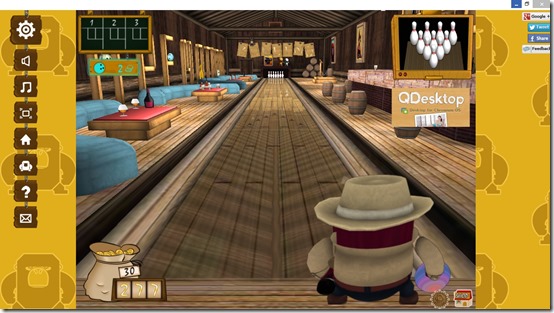 To adjust the position, take the cursor on the ape. When the cursor changes to the bidirectional arrow, you can drag it to the left or right side to adjust the ape’s position. As you bowl your way and hit the pins that are present, the coins you collect would be shown in a counter for it that is present on the lower left side.

As you continue to play and collect coins, you shall be able to pay the bar’s bills and also to unlock new locations.

My Verdict on 3D Bowling Game

Finally, to conclude, I would like to say that 3D Bowling Game is quite a nice Chrome extension. Its features are quite nice. Plus, it supports good quality 3D effects and sounds which will ensure that you are engaged more into the game even more. All in all, it is a good Chrome extension. Try it and share your experience with us.