This text adventure game is developed by Sony and W + K Portland. The game mostly includes Sony products as inventory items; with additional creative options. In this game you will be tested on how you respond to situations and instruct other agents who are involved in missions. You just have to make use of the resources and guide the agents to complete the mission. So, are you ready to serve for MI6? 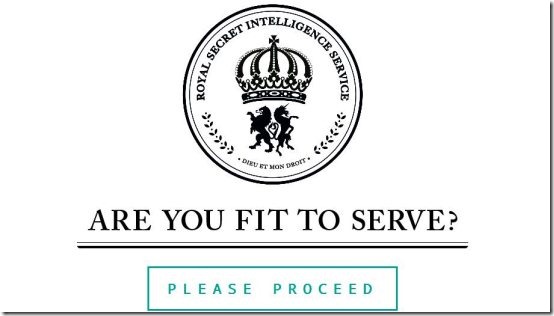 The new Bond film is released in theaters named Skyfall and Daniel Craig is back with more action in this movie. The Bond movies has so many fans from kids to elders and Sony being one of the partners makes huge profits out of these Bond movies. Now Sony has even gone a step ahead and developed this game based on James Bond character. James Bond is an intelligence officer at MI6. He is also known by his code number 007. All these Bond movies from 1962 are based on the Novel written by Ian Fleming. The Bond character and his gadgets are so fascinating that, everybody likes to be a secret agent like 007.

Now gamers can play this role-playing game to check whether they are fit to serve in MI6; as a secret agent. In this British Intelligence Officer Exam there is no action involved, you should just ask questions or give suggestions on how to proceed with the mission. As soon as you visit the numbered domain mentioned in the website, you will be asked “ARE YOU FIT TO SERVE?” (as shown in above screenshot). Click on Please Proceed button, and then start the game (see below screenshot). 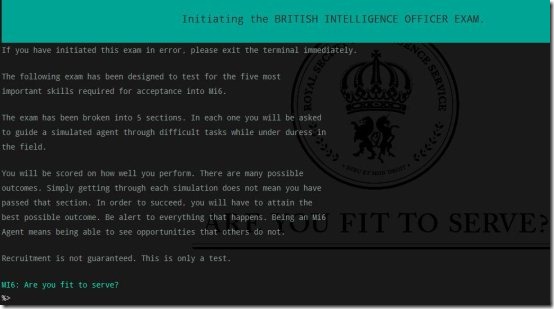 How To Progress in This Text Adventure Game?

The agent in the field will keep asking you questions in text form and you have to give them instructions on how to proceed next. Respond according to the questions or situations explained by the agent. Use simple English and you can neglect the word connectors because all that is important is the keywords. The agents always carry Sony products which are to be used during the missions. If you want any other help just type in Help, Map to see map of the location, Inventory to see the list of items, Objectives to remind of the objectives of mission, and sitrep to view situational report.

If you proceed to next missions doesn’t mean you are winning and you have limited number of tries to retry the mission. The mission includes evading, capturing enemies for interrogation, getting important equipment, and decoding missions. So, it’s time to check if you are fit in MI6. 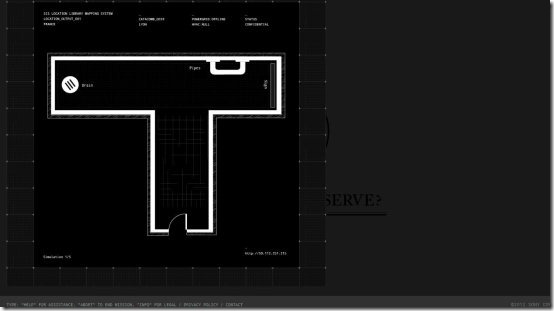 Play this game and if you qualify, introduce yourself as “Bond… James Bond” to your friends and have fun. The game is really fun if you like adventure; though it is a text adventure game. You can also try this detective game Murder In New York.