Relax Sleep Melodies is a Windows 10 sleep sounds app which helps you meditate, sleep, relax using these beautiful sounds. The app also has a timer function which will turn off the sounds after the duration selected by you. This can be a great way to sleep to such beautiful sounds and the app would automatically turn off after a specified duration.

The Windows 10 sleep sounds app can be downloaded from the Windows 10 store or from the link given at the end of this article. When you start this app you will come across an interface like the one you see in the screenshot below. 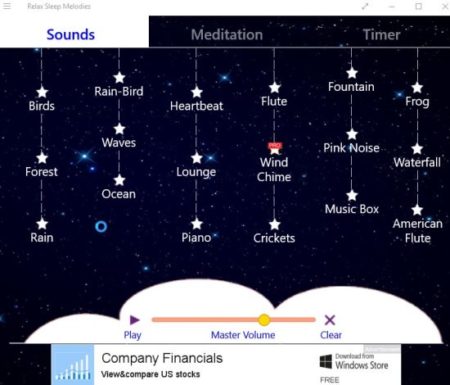 The home page here lists all the sounds that you can play. You can click on a sound that you want to play and it will start playing. You can play pause the sound from the play button given at the bottom of the screen. The volume of the app can also be controlled by using the volume slider given along with the play button. As you can see at the bottom of this window the app is ad supported. You can upgrade to the paid version to get rid of ads and unlock some sounds available in the pro version. 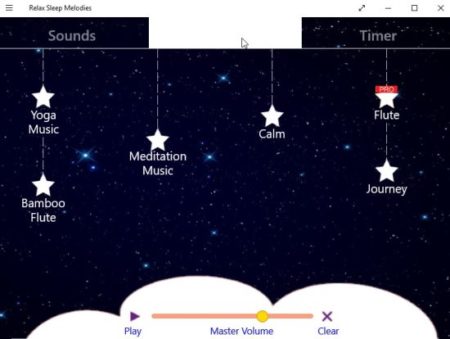 The next tab to sounds is meditation, this can be seen in the screenshot above. The meditation sounds are different and can be used while doing yoga, exercising, etc. The next tab is the timer tab, which helps you set a timer for the current playing sound. The timer page screenshot can be seen below. 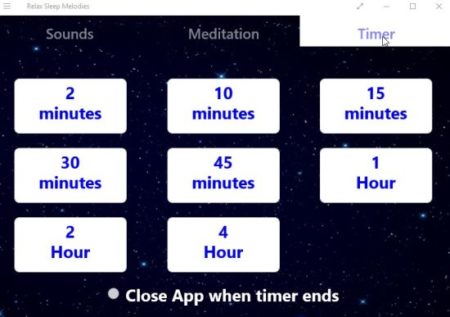 Relax Sleep Melodies is a nice app which will help you sleep listening to beautiful sounds. There are also different sounds which you can play while meditating. All the sounds in the app have a very relaxing effect and you can use these sounds anytime apart from sleeping or meditating. You can turn these sounds on while exercising, yoga, napping, etc. If you are using it while sleeping then you can choose the timer function which will turn off the app automatically after the specified time.