This Twitter client for Mac has become one of the most popular software to use Twitter on Mac. The application is  fast, lightweight, and has a clean, simple interface. 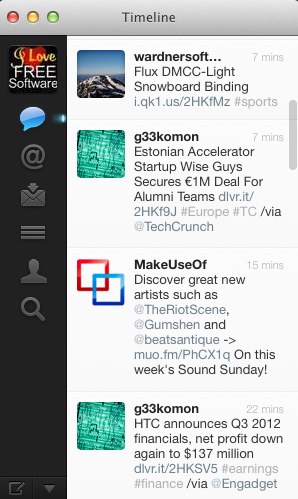 The application window is divided into panels, a main panel where Tweets appear and a sleek looking sidebar from where you can access all functions that are in the application. When you switch from timeline to something else, it does that with a really cool animation.

When we search for Twitter on the Mac App Store, then this official Twitter client for Mac comes up at number one in the list. Anyway here are some free app for your iPad and Android devices (shameless plugs), so that you can stay in the loop.

When you open up Twitter for Mac for the first time , it will simply popup a dialog box that will ask for your twitter name and password as shown in the screenshot below. Enter these details to get started with this application.

Now a window will come up as shown in the first screen shot, in this window you will be able to see your twitter timeline. The interface as mentioned above is divided into two panels. In the screenshot below, I have tried to show what each button in the sidebar functions does; this will be enough for getting you started with this application. 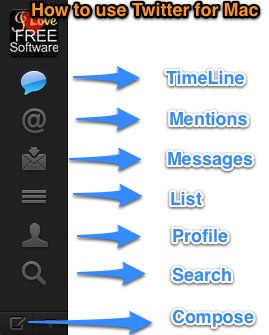 One thing that I did not like about the application is that the buttons for reply, retweet etc. only popup on a tweet when we put our pointer on it. This is shown in the screenshot below and is highlighted in orange. It would have been better if they where always visible and did not hide when the cursor is moved away.

When you get a new notification, then the Twitter icon on the statusbar will change color from Grey to Blue. Clicking on the icon gives you four shortcuts: new tweet, tweets,  mentions, and messages. This is a really nice feature and clicking on a button will take you to the respective window in the application.

This application offers a clean, fast, simple, and intuitive UI, and that too for free. It is built and is maintained by Twitter so, it flows Twitter design philosophy of simplicity. This results in an application that work and looks darn good.

Only problem with this Twitter client is that it lacks some features that a power user might want to use. But for a normal user, it works pretty well. So, go ahead and download free Twitter client for Mac and the first thing you would do that is follow us @ilovefreesw :)