Hit Tennis 3 is a free iPhone tennis 3D game. Since the game is in 3D, so it provides a good realistic Tennis experience on iPhone. The game uses swipe and flick controls, using which you can play the game easily. The game is so beautifully designed that you will get  a feel of playing real tennis. The game consists of various courts, tournaments, and bonus moves/tennis equipment which makes playing this game very entertaining. There are a total of 24 tournament across 6 different locations of World and your aim is to win all of them by winning against a number of best players.

The competition keeps becoming tougher as you progress in the game. For each win, you also get virtual cash, which you can use to upgrade your equipment and power shots. You can also check all the trophies won by you from the Trophy Room option. 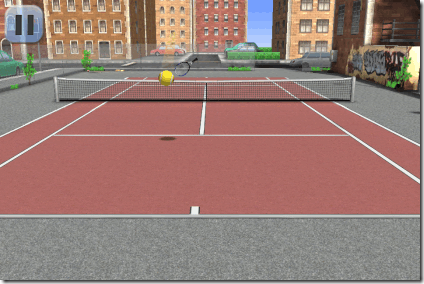 The Hit Tennis 3 game doesn’t wants to you to register or link any social account with it for playing the game. Simply, tap on the icon and start playing the game. You only need to use swipe and flick to play the game. Just swipe on the screen to adjust the direction where you want to hit the ball and flick the ball to hit it. Its that much simple. There is no other trick or science in playing this game. The only difference between a real tennis game and this one is that a real Tennis game consists of about 6 games to win 1 set in the match. But in this game, the player who wins 2 games first is declared as the winner.

When you launch the game, you will play against  a lady character. You need to defeat her to proceed ahead in the game. When you defeat her, you will be promoted to Level 2 and the real game will begin. Now, you will see the following options: Play, Trophy Room, and Upgrades. 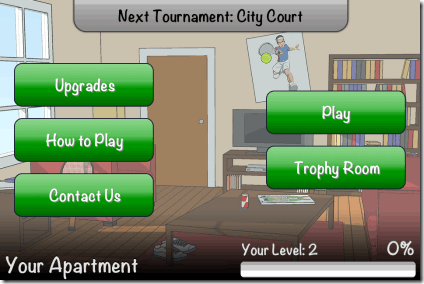 While playing any match, you can quit match anytime to go back to your Apartment. Apartment (home page of this game) is the very same place from where you find options  Play, Trophy Room, and Upgrades.

You may also like this Stick Tennis game for iPhone, iPad, and Android reviewed by us.

Hit Tennis 3 is a very entertaining game which can definitely help you in killing your boredom. The swipe and flick controls are truly awesome and game doesn’t lag anywhere, so you can be sure about the entertainment factor. If you like tennis and would like to enjoy tennis on your iPhone, then go for this game,