Cautoh actually works as an alcohol calculator where you need to tell the calculator that what kind of drink you’ve taken and when you’ve taken it. You can choose the drinks from various options like Beer, Red Wine, Aguardiente, Rum, Tequilla, Whisky, Vodka Cocktail, and more. You can also see whether you will be able to drive or not with the current blood alcohol content (BAC). It also determines the limit of your country (if there is one and can be fetched by Cautoh) and shows the alcohol level limit by WHO for driving. 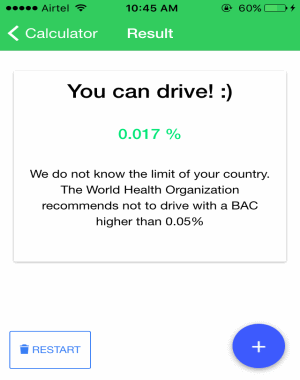 There is another useful app ” 7 Second Diet” for iPhone which you can use to record your alcohol consumption.

How to Find Out Alcohol Level Based on Drinks Consumed:

Step 1: As soon as you install and launch the app, you’ll see 2 different buttons at the bottom of the screen. The Calculator button can be used to find out your alcohol level based on drinks consumption. The other button will allow you to connect to a device called “Breathalyzer” which is also created by the Cautoh team. However, I don’t have one so I am going to simply explain the alcohol calculator in this post.

Step 2: Tap the “Calculator” button and it will ask you to create a new profile by entering your name, email id, gender, weight, and your country. When you’re done entering information, tap the “Tick” button to proceed. 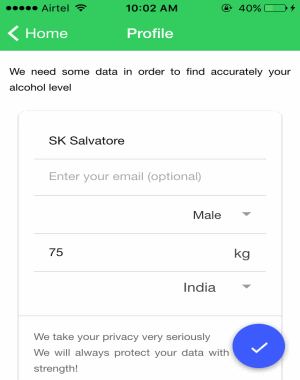 Step 3: After that, the list of drinks will appear with name, BAC level, and quantity in ml. The available drinks are Beer, Red Wine, Rum, Whisky, Vodka Cocktail, Aguardiente, Tequilla, Mojito, Cuba Libre, Screwdriver, Margarita, White Wine, Jagermeister, and Craft Beer. Simply tap on the drinks which you’ve taken and they will be added for calculating alcohol level in your blood. 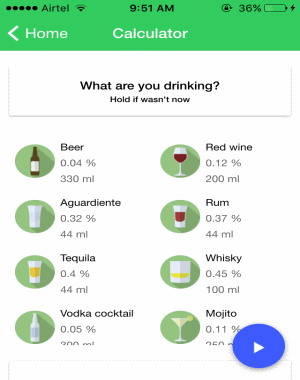 Step 4: When you select drinks, the app assumes that you’re drinking them now. However, if it wasn’t now then simply press and hold on any drink. After that, a popup will appear where you can select the consumption time either as Now, 15 minutes ago, 30 minutes ago, 1 hour ago, or 2 hours ago. 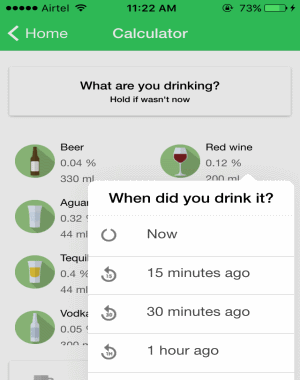 Step 5: Once you’re done selecting the consumption time and drinks, hit the “Play” icon at the bottom. As soon as you do that, it will automatically analyze the drinks and duration which you have added and generate the result with BAC or alcohol level and driving recommendation. It will also show the standard limit by WHO for driving. If the app says that you can’t drive with the current alcohol level, then it will also tell you how much time it will take for you to be in limit and drive as shown below. 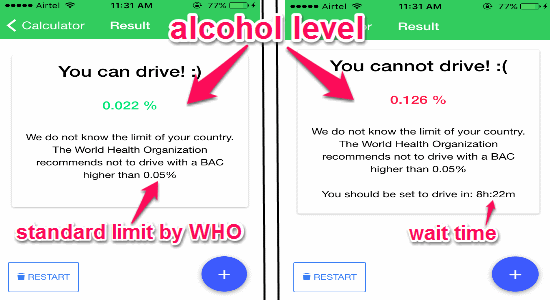 Cautoh is a very useful app for all the alcohol lovers out there and also those who happen to own a car. This app allows you to calculate your blood alcohol content based on the drinks which you’ve taken recently. It also recommends you that will you be able to drive your car with your current alcohol level. If not, then how much longer will it take for you to get back in limits. This app is quite interesting, give it a try.