App Cloner is a free app to clone installed apps in Android. Using this android app, you can make an additional copy of the same app that works in the same way the parent app does. For the cloned app, you can configure various parameters such as name, icon-color, icon orientation, add badges to the icon, etc. The cloned app has its own data and separate access to the system resources.

A perfect use case of this app would be that you can hide an app which has some personal data. You can then clone that app and leave it on your launcher or home screen. So, someone spying on your phone will not be able to see the private data that your parent app contains. You can also use it multi login to various popular services, like, Facebook, Twitter, etc. 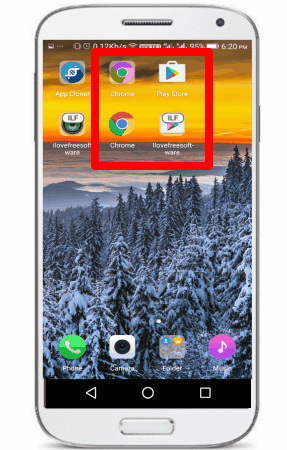 Let’s see what it takes to clone installed apps in Android.

How to Clone Installed Apps in Android?

The App Cloner can make another exact copy of the same installed app in your phone. And you can configure various parameters of the cloned app. You can change the color, and add a badge to the icon, rotate, flip the icon and much more. However, some of the other interesting features of the app are offered in the paid version.

Follow these simple steps to clone installed apps in Android.

Step 1: Download and install App Cloner from this link. After that, open it and you will find its interface similar to the following screenshot. 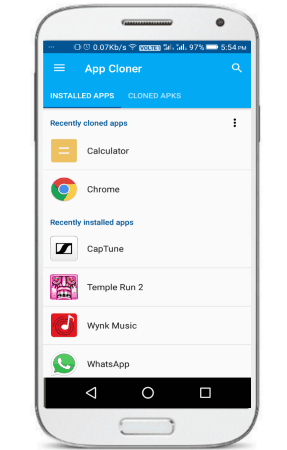 Step 2: On the main page of the app, it will list all the installed apps on your phone. You can tap and open any app to clone.

Step 3: After choosing a desired app, it will take you to the cloning section, where you can specify your preferences to change the look and feel of the app that is being cloned. Here you can opt to change the icon color of the target app, add a 3 letter badge, change its name, etc. 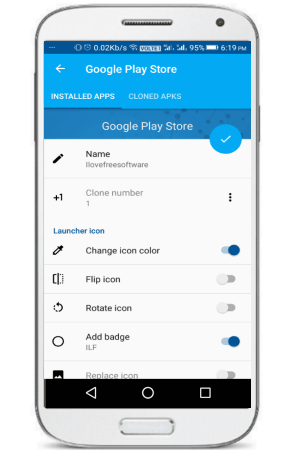 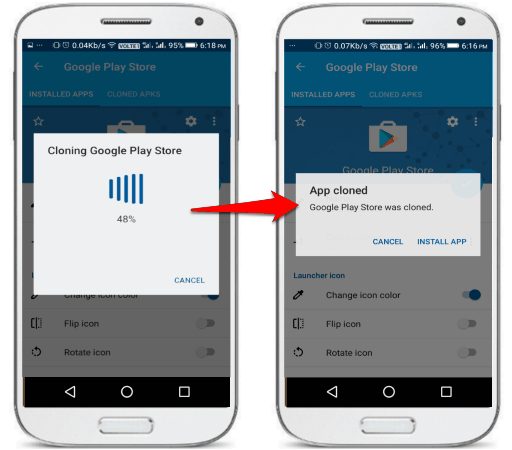 At the end of the step 4, the app has cloned, and you can check it out in your Android app launcher.

So, in this way you can easily clone installed apps in Android using App Cloner. And the cloned app doesn’t conflict with the parent app in any way. However, in some cases the apps which use notifications to be pushed on the Android home screen may show some conflicts.

App Cloner is really a very nice app to clone installed apps in Android. The app works pretty well and does what it promises. Using this Android app, you can easily make two identical copies of the any installed app on your phone and both the apps behave as if they are installed on two different phones. However, the free version of the App Cloner has limited features, for more features, you will have to ultimately buy it.