Find the Best Route is a free Android brain game to test brain skills by finding the best route. The gameplay of the game looks really simple, but its quite difficult and addictive, as you play the game. While finding the best route, you have to keep in mind the targeted number of steps specified for each level. The route found by you should have number of steps less than the ones specified for the level which you are playing.

The game includes different levels to test your brain skills. For personlization, it includes 7 color themes to make game look even cooler and personal. For the clearance of each level, you are awarded with points and also, the upcoming levels gets unlocked. 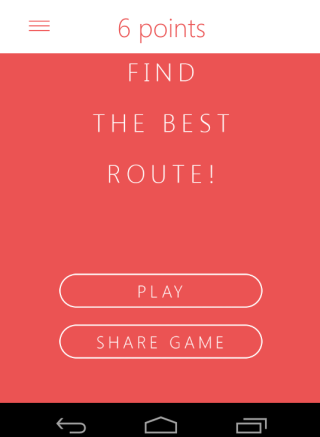 Gameplay of This Android Brain Game to Test Brain Skills:

On launching the game, you will see the home screen of the game with Play option. Tap on it to start the game. On tapping it, you will see a board divided into small square boxes. You can see that there is a pointed arrow like icon on the board. This icon signifies your starting point. You have to make this point move and come back to this starting point again. 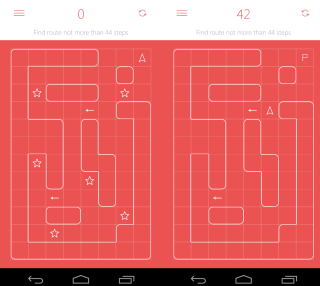 To move this point, you only have to tap on the box where you want it to go, but that box should be a part of the path which you want to follow. You can see that there are a few stars present on the board. While moving the point and taking back to start position, you have to keep in mind that you have to cross through each of the stars. If you miss any star, then that path will be an invalid path.

The maximum number of steps which you can take to complete the level are given at the top. So, you have to find the best path, which starts and ends at starting point, crosses all stars, and also, the number of steps is less than the specified ones. If you find such a route, then you clear that level and move to the next one. 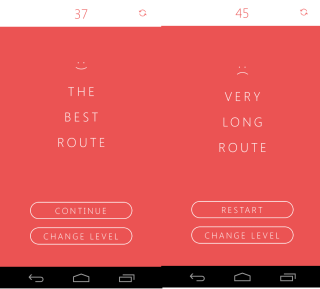 The other options are available on three bar icon at top left corner. It gives you the option to change the level and theme color of the game. While changing levels, you can only switch between those levels which you have unlocked. 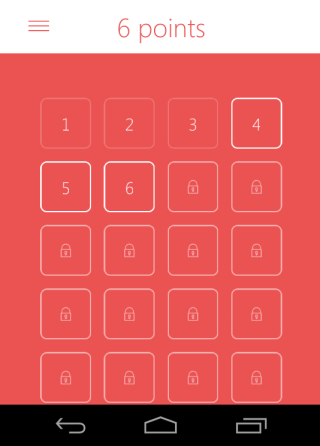 While changing theme color, you can choose from: Red, Cyan, Blue, Violet, Green, Brown, and Grey.

You may also like: Free Brain Storming Game for Android.

Find the Best Route is an awesome Android brain game, which tests your brain skills. It might feel easy in the beginning levels, but it goes on to become tough and interesting, as the high levels are unlocked. Do give it a try.

Get Find the Best Route here.