Such Twitter analyzer tools can be really helpful in research, marketing, and lead generation. For example, you can use it to keep an eye on the competition and predict their behavior. Similarly, researchers and journalists can use such a tool to collect information and find patterns and user interactions. With that said, let’s check out this tool in details. 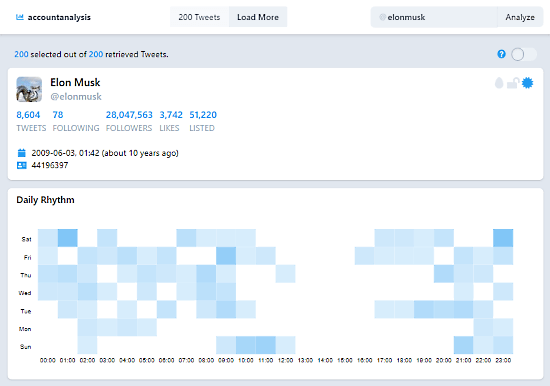 Initially, this tool analyzes the recent 200 tweets and shows stats based on that. But, you can load more tweets in the set of 200 to get overall analytics stats of the account.

At the top, it shows the account information covering a total number of tweets, liked, lists, followers, and following along with account age and unique user ID. This account information is then followed by the interactive charts and graph which gives you insight into that Twitter account. It covers: 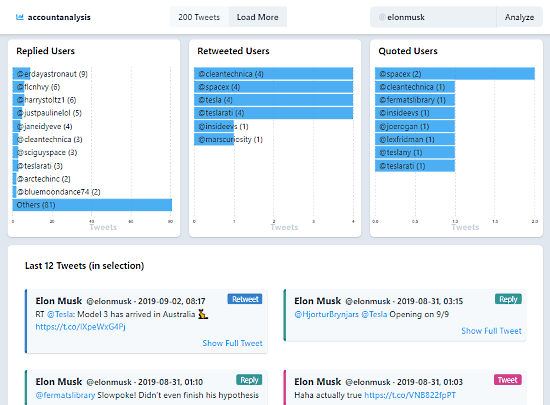 You can interact with these stat charts to get more detailed insights. You can select any particular entry from any chart and the rest of the chart automatically adapt accordingly to show the relevant information. For example, you can select a preferred tweet language and check out all the stats of tweets tweeted in that particular language. You can do this for any entry in any stat section. This way, you can get personalized insight into the account.

Account Analyzer is a comprehensive Twitter analytics tool that helps you get complete insights into any public twitter profile. It lets you personalize the results by picking the information that matters to you and easily filter out the unwanted information. This is useful for researchers and journalists to predict an account behavior like at what time of the day you are most likely to get a reply from them.