Here is a nicely drawn comparison between Zoho Cliq and Slack based on features. This comparison will help you find out which one of these services is better depending on their various basic and advanced features. Some of the features which I will include in the comparison are the intuitive interface, usability, cross-platform, group chat, private chat, file storage & sharing, audio calls, video calls, etc.

Slack is no doubt one of the bigger players among the team communication tools, as it bundles dozens of features which are required for a seamless and efficient team communication. But nowadays, many other small but feature-rich players (like Zoho Cliq) are emerging for Enterprise Communication. It might not be as popular as Slack, but it does offer some competing features which forced me to do this comparison for you. 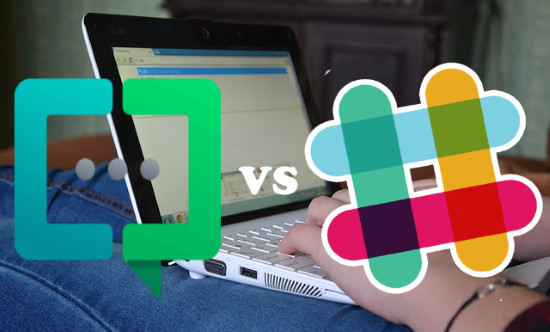 Comparison between Zoho Cliq vs Slack Based on Features in the Free Version:

So, go through this comparison and decide which service you would like to use for communicating with your team. The features which I will compare are offered by the free version of these services.

Both of these team communication services offers clients for all the platforms. So, in this case, there is no clear winner and also no advantage of using one service instead of other.

Personally, I found the interfaces of Zoho Cliq and Slack to be quite similar. The only difference which you might notice is the placement of buttons, options, and icons on the interface.

Number of Users in Free Version:

Here, both of these services have advantages and disadvantages over each other. Zoho Cliq supports invitation of unlimited users to the team but limits you to 100 users per channel. But, in Slack you can invite up to 1,000 users only, however, all of these users can be added to a single channel.

Here, I think Slack wins the battle against Zoho Cliq as you can group chat with 1,000 users in a single channel. But, if we ignore the number of users, then both of these services are perfect for having a group chat.

You can use both Zoho Cliq and Slack to have private chat with team members. So, you can choose either of these services for sending and receiving direct messages privately.

Here, we clearly have a winner i.e. Zoho Cliq as it provides unlimited message history to be searched and accessed anytime you want.

In terms of file sharing, both of these services are same as you can share similar files. But, if we talk about the file storage, then Zoho Cliq wins over Slack.

Both of these team communication services provide a built-in feature for making audio calls to team members. If you have a decent Internet connectivity, then you can have a seamless audio chat.

Both Zoho Cliq and Slack have the feature to make video calls. But, if you want to group video chat in the free version, then only Zoho Cliq lets you do that.

Here, Slack wins the battle against Zoho Cliq as it comes with a built-in screen sharing feature. However, if you’re using Zoho Cliq and want to screen share, then using the third-party app is also a great option to do that.

Here, you can see the price of Zoho Cliq is relatively less than that of Slack. So, if you don’t want to spend more money for getting almost all the required features for team communication, then you can choose Zoho Cliq.

So, Zoho Cliq vs Slack, which one is better?

In here, I have drawn a feature based comparison of Zoho Cliq vs Slack in order to help you figure out the best one for your team. So, I hope you will find this post useful for this purpose.

If you’re looking for something with unlimited messages, unlimited search history, unlimited team members, etc. in the free version, then you can go ahead and start using Zoho Cliq right away. But, if you want to integrate dozens of your favorite third-party apps with your team communication account, then Slack is the best option.

Based on these features we have also compared Slack vs Ryver and Flock vs Slack, so you may also take a look at them.