Here is a simple feature based comparison of Flock vs Slack to find out which one is better. I will compare various features including cross-platform usability, group chat, file sharing & storage, audio/video calls, and so on.

Slack is the posterboy for team communication and is pretty feature rich. But there are a lot of Enterprise communication tools out there that might not be as popular, but give a tough competition to Slack in terms of features. One such tool is Flock.

I will draw a comparison between Flock and Slack features to figure out which one is the best for team communication. Going through the feature based comparison, you will be able to decide which service you want to use for your team and why. I will focus only on those features that are provided in free versions of these tools. 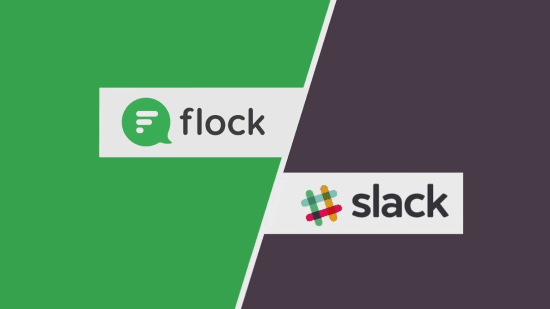 Comparison of Flock vs Slack based on Features:

Now, let us compare some of the important features of Flock and Slack to see which one is better. The comparison is only for the free versions of both services.

Both Flock and Slack are available for all the major platforms. Unlike Flock, Slack has an advantage as it is also available for Windows phone and Linux.

Personally, I think the interface of Flock is much simpler and eaiser to understand than that of Slack. This is because you get all the important components required for team communication in one single screen.

Both of these services provide third-party apps for you to integrate. But, the free version of Flock doesn’t have any limitation on the number of apps which you can integrate, whereas, the free version of Slack does have a limitation of up to 10 apps. The number of supported third-party apps in Flock is pretty less than that of Slack. So, depending on which app you want to integrate, you can choose which service you want to use.

Number of Users in Free Version:

Flock obviously wins the battle against Slack for the number of team members which you can invite for communication. However, limit of 1,000 users in Slack is also pretty huge and I don’t think this limit makes it less usable as compared to Flock.

Here, we have a clear winner “Flock” which makes it possible for you to easily create, share, and manage to-do lists by collaborating with your team.

If you want to jot down important notes while communicating with your team, then using Flock is probably a better option than Slack.

Each one of them is perfect for group chat. Do note that the maximum number of users which you can invite for group chat in Slack is up to 1000 users. But, in Flock, there is no limit.

Both of these services let you have private conversations with specific team members. So, you can use any one of them to have one-on-one chat.

So, both Flock and Slack are limited to the same number of search message history in the free version. No matter which service you’re using, you can search and access up to 10k messages history.

Here, you can see that Flock relatively provides more space than Slack, as you can upload up to 1000 files of 100 MB each. However, as there is also a limitation on the numbers of files, which means even if you upload 1000 files of small sizes then also it will reach the limit. So, choose any of these services wisely for file sharing.

For audio calls, Slack wins the battle against Flock as it has a built-in feature for that. But, the “Appear.in” integration of Flock is also pretty good for audio calls. So, choose any of these services as you see fit for your need.

I prefer the built-in video calling feature of Slack, as compared to the third-party integration that is provided by Flock.

Both of these services allow you to share your desktop screen. So, you can use either of them to do that.

Here, Flock wins the battle against Slack. Flock is much faster than Slack in certain aspects like file upload, file sharing, etc.

The pricing plans of both these services look reasonable, but if you’re looking for something cheap with outstanding features then choose Flock over Slack.

So, Flock vs Slack, which one is better?

The main purpose of this article was to draw a comparison between Flock and Slack (free versions only). I hope all the above feature based comparison will help you decide which service you want to use for team communication.

If you ask for my opinion, then I would recommend you to use Flock if you’re looking for something with no limitations on users, app integration, messages, etc. However, where Slack excels is in the number of external app integrations that it supports. There are some other advantages of Flock over Slack like search contacts (by name, email, job title, etc.), offline team directory, and even a mailing list for each channel.

So, to summarize, if you want a well polished app for team communication that integrates with some of the popular apps out there, then Flock would be way to go. However, if you are looking for some specific app integrations that are not available in Flock, then Slack is your best bet.