In this tutorial, you will learn how to record calls and transcribe to text on Android. There is actually a free app available called “Otter Voice Notes” that can help you record your phone calls and get the audio transcribed to text automatically. The best part is that all the transcription is done in real-time for each word you or the person say on the phone. Using this app is pretty easy, as all you gotta do is start recording the audio on your phone and then make a call. It will run in the background and record everything you say. While talking, you can see the transcribed text popping up along with the timestamp.

They don’t actually work like the native call recorder apps for Android, as you have to start recording on the app instead of the dialer. But, if you want to transcribe the audio to text, then this app is what you need. Do note that the free version has a limit of 600 minutes per month. As of now, this app only supports the English language. The accuracy of the transcription is pretty impressive and just like the core audio transcription services. 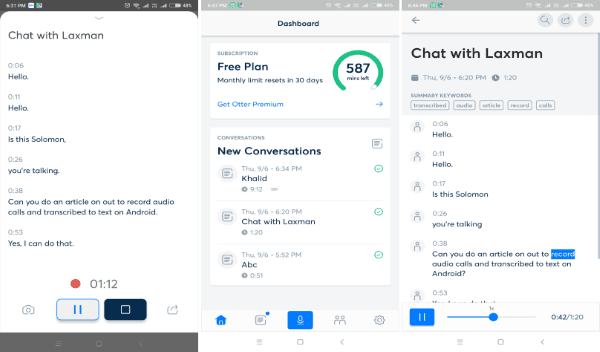 How to Record Calls and Transcribe to Text on Android:

To get started, you would need to first install the “Otter Voice Notes” app on your Android phone. After that, open the app and then sign up using your Email or Google account.

When you’re done with that, the main screen will appear and at the bottom, you will see a “Record” button. Now, go ahead and tap the “Record” button to start recording audio. It will open a blank screen with the option to add a recording title at the top.

After you do that, you can proceed to record a call and transcribe the audio to text. For that, simply minimize this app to the background and place a call to anyone you want using your Android dialer. As soon as you do that, it will start recording everything you and the other person say on the phone. To get a better result make sure there is no background noise. 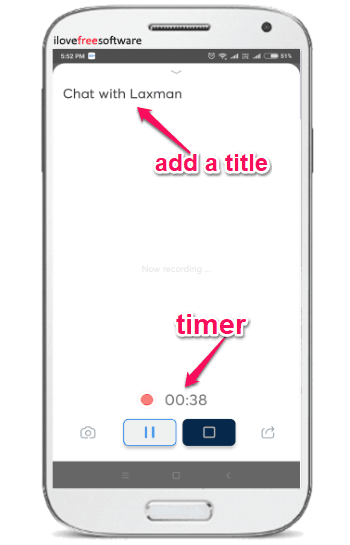 Open the app again when you’re in the call, and you will see a timer running at the bottom of the blank screen. It indicates for how long the audio is recording. Now, as you speak, it will also start transcribing the audio to text automatically in real time. You can see the text popping up on the screen as you or the person on the other side speaks. Another useful feature of this app is that along with the transcribed text, it will also show you the timestamp. 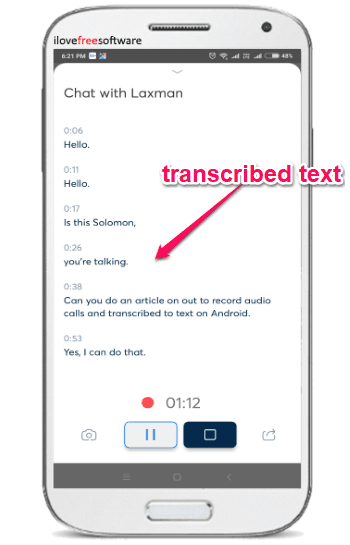 When you’re done, simply hit the “Stop” button to stop recording. It will then save the audio recording along with the transcribed text. You can see all the recordings on the “Home” tab and browse them to listen to the audio along with the synchronized text. It also lets you edit the text, add speaker names, see summary keywords, search keywords, and export them either as audio, text, or PDF files. 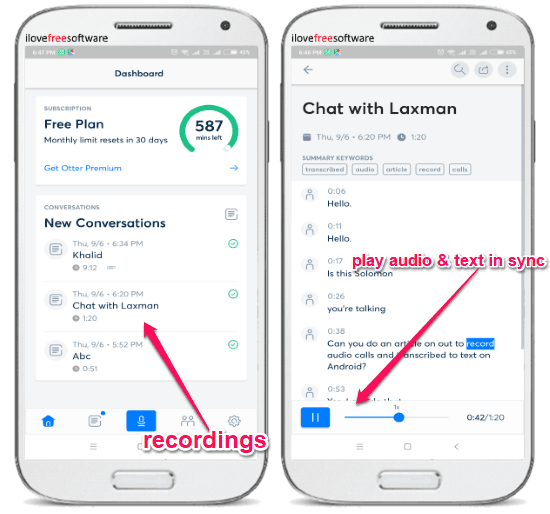 This way you can easily record as many phone calls as you want until you reach the 600 minutes per month limit. The remaining minutes can be seen in the “Home” tab and it will reset automatically every month. There are many other useful features available in this app such as:

So, if you have been looking for a solution to record calls and transcribe the audio to text automatically, then this Android app is for you. Otter Voice Notes makes it very simple for you to do that without any manual effort. The options to listen to the audio along with synchronized text is also a pretty cool feature. Well, the best thing is that you can export the audio transcription for free.