KitKat Launcher for Android is a free Android launcher which provides the functionality and looks of stock Android KitKat 4.4 launcher. This app allows you to change the interface of the home screens and apps tray to get an experience of the stock launcher of Android Kitkat on your device.

With the launch of Nexus 5 and Android KitKat 4.4, one of the biggest changes was to the launcher. This new launcher is called Google Now Launcher. At first it was just for the Nexus 5, now Google has made it available in the Play Store, but only for Nexus devices which are updated to Android KitKat 4.4. KitKat Launcher For Android allows you to experience the KitKat launcher on any device which is running Android 4.0.3 and up. This is a fun application which gives your device the same look as a KitKat device, along with cool wallpapers.

Yesterday I covered how to make Android look like iOS 7. If instead of iOS, you would prefer to theme your Android with latest Android look n feel, Kitkat Launcher is for you. 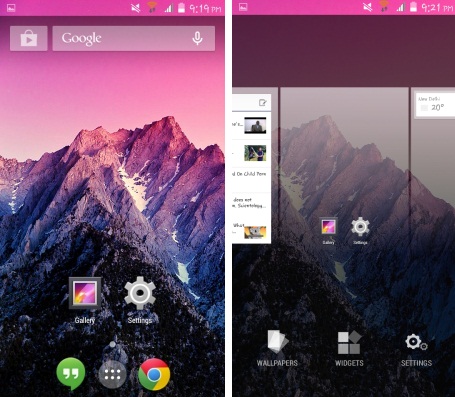 With this app for Android, surely you will get the look of Android Kitkat. The icons are big in this launcher as in the original, which makes it more user friendly. By default, there will only be one home screen. If you would like to add more then you will have to drag a widget or an app shortcut to the right or the left of the screen and then the new home screen will be created. If you want to delete a home screen, then remove all the app shortcuts and widgets from it.

To add widgets, change wallpaper, or get to settings, you will need to press the menu button. This will bring up the interface as shown in the second screenshot above.

How to install KitKat Launcher for Android:

Download KitKat Launcher for Android from the link given at the end of this review. After installing the application from the Google Play Store, simply press the home button on your Android device, and you will have the dialog as shown below. Just select KitKat launcher and click on ‘Always’. Now you have successfully installed and set KitKat Launcher as default. Now you can use this launcher as your default launcher and start experiencing some KitKat love. 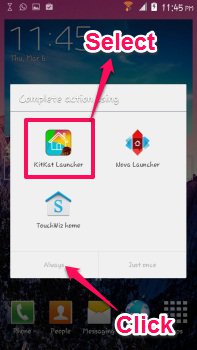 Features of KitKat Launcher for Android:

KitKat launcher for Android delivers what it promises. Get a simple and clean looking home screen with this app. Also the addition features as described above are also really useful and further enhance the functionality of this app. So if you are a owner of a device which cannot run the Google Now Launcher (like most of us), then this app is the best choice for getting a feel of Android 4.4. One thing which bugged me was that lots of other features such as smart transparent status bar and transitions are only available in the paid version.

Get KitKat Launcher for Android by clicking here or scan the QR code below. 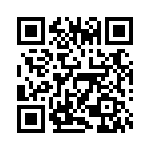