Quickie Folder Sync app for Windows 8 is a free app that allows you to sync files between two folders. The app might sound complex but the app is really simple to use and with this app you can sync folder in Windows 8 with just a few steps.

This makes the process of keeping backups of certain folder or drives extremely simple. Use quickie folder sync app for Windows 8 to sync all the files within a folder to the other folder of your choice. One special feature of this app is that it has the ability to sync files of specific extensions from one folder to the other folder instead of the whole contents of the two folders. The app does not do a two-way sync or mirrored sync; it simply copies the content from the first folder to the second. 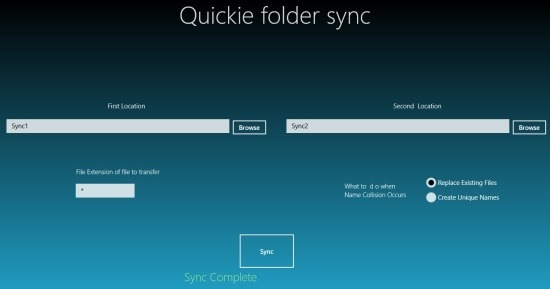 How to use folder sync app in Windows 8:

Quickie folder sync app for Windows 8 is extremely simple to use. Let’s see how we can use the app to sync folders in Windows 8.