Audials Radio app for Windows 8 is an app that allows you to listen to over 40,000 radio stations. The interface of the app is good enough; I would say that it is not as good-looking as TuneIn radio nor it is as simple as Radio World, it is simply pleasing. 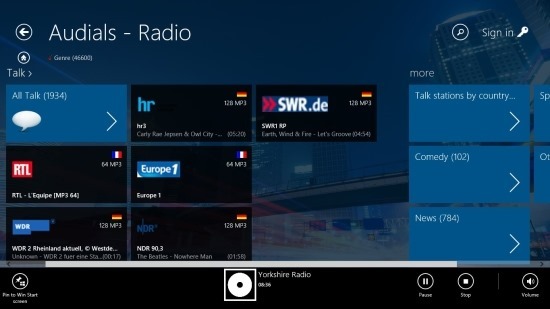 The most impressive feature of the app is that it has over 40,000 radio stations and these station are categorized by genre, language, country, and even top artists. The app allows you to personalize things by adding your favorite stations to the apps main screen and even to your Windows 8 start screen.

Also you can simply type what you want to listen to in the search area and app will get you results related to the query. Audials radio for Windows 8 displays playback controls in the bottom part of the app window; this makes it really easy to control the playback without even opening up the now playing section of the app.

You can download Audials Radio app for Windows 8 from the link provided at the end of the post. After you have downloaded and installed Audials Radio from the Windows Store, just run it like any other Windows 8 app from the start screen and you will have the interface as shown below. The home screen of the app contains the two sections as seen below, one of them is the home section while the other one is labeled more. 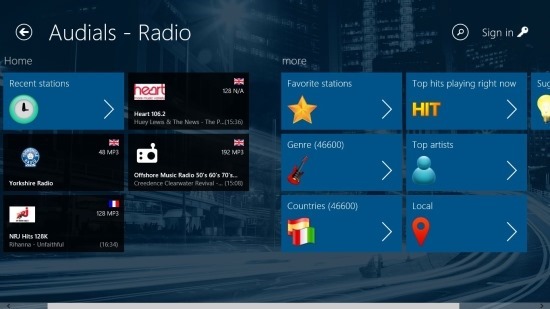 The home section has some radio stations listed and also a tile which shows the recent stations that you have played in the app.

In the more section of the app you will have the tiles like favorite stations, genre, countries, top artist, local, top hits, and suggestions. Each of these tiles opens up a set of options depending on it’s name for example the genre tile opens an interface as shown below that helps you browse through the 46,600 radio stations based on the genres of the radio station. Similarly the countries tiles shows the radio stations categorized by the countries. This makes it easy to find out and search radio stations from your country. 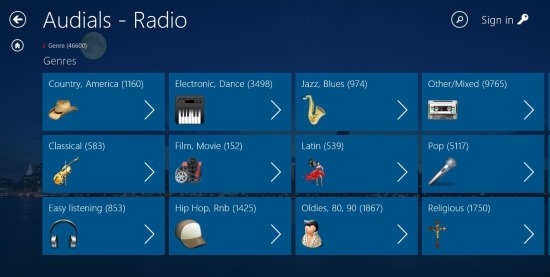 The genre that are offered by this app are listed below. These genre are listed in the typical horizontal scrolling tiles of Windows 8 as shown above.

Once you have found out the station of your choice from the different categories just click on it, play it and you have the interface as shown below. One thing that I liked is that where ever you are in the app and you are able to see the flag of the country from where the radio station is from on the tile of the radio station, now playing window etc.

When you play a station for the first time then the app will ask for your permission to run the app in the background; grant the app this permission otherwise the radio will stop playing if you switch to another app in Windows 8. 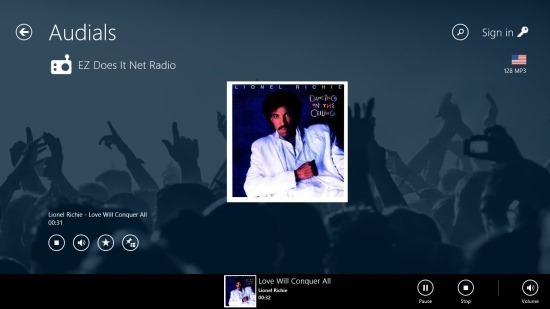 The now playing interface of the app is really simple and elegant. It gives you the ability to stop/play the station, change volume level, favorite, and pin the station to the start screen.

Also you have the same controls located on the bottom option menu of the app that help you perform the same action while you are not in the now playing windows of the app.

This free app for Windows 8 is extremely simple to use and offers a list of options that makes the experience of listening to radio station even more fun. The app is completely free and is available in the  Music & Video section on the Windows Store.