Public Fox is an incredibly useful Mozilla Firefox extension that puts you in total control of your browser. Super easy to use yet loaded with features to the cusp, Public Fox lets you block downloads, URLs with password. Yeah, you read that right! You can actually block access to downloads and certain websites (via URL blacklisting) in Mozilla Firefox with a password, using Public Fox. It even lets you block downloading of certain file types selectively, or all of them. And that’s not all. Public Fox also lets you password protect almost every single (important) constituent module of Mozilla Firefox. You can restrict access to bookmarks, settings, history and things like that. Heck, you can even prevent actions such as addition/removal of bookmarks, purging of browsing history, and of course, un-installing of add-ons. Bet you’re stoked already, right? Let’s read more!

How to use Public Fox to block Downloads, URLs with Password?

Before you can use Public Fox to take complete control of your Mozilla Firefox, the first obvious step is to install this thing. The installation process is simple, boring, and exactly like adding any other regular extension to Mozilla Firefox. Sprint over to the Firefox Add-ons store, search for the extension, and hit that Add to Firefox button. Once that’s done, simply restart the browser, and this thing’s ready to roll. Here’s how the Public Fox’s options window looks like: 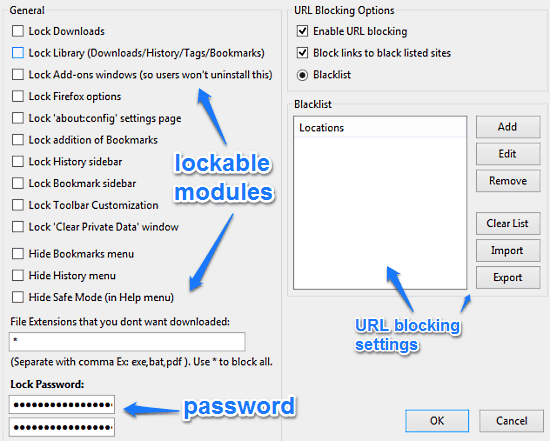 Pretty comprehensive, right? As illustrated by the above screenshot, Public Fox sports quite a detailed but easy to figure options/settings window. This is where you configure the stuff that you want Public Fox to block or restrict access to. It’s roughly divided into two vertical panes. The Left Pane consists of a listing of the Mozilla Firefox modules that can be blocked by Public Fox (selectable via check boxes against them), and it also lets you specify the locking password. On the other hand, the Right Pane consists of URL blocking settings. Simple as pie!

Public Fox lets you block/prevent downloads. More specifically, it prevents the browser from downloading files by requiring an authorization password (which can be specified under the Lock Password section of the left pane, as discussed in the previous section) to do so. You can either block downloads of all kinds of file types, or selectively specify the file types that you want downloaded via their file extensions. Let’s look at a step-by-step guide:

Step 1: Open up Public Fox’s options, and check the Lock Downloads option under General. After that, move down and find the text box labeled File Extensions that you don’t want downloaded. Here, specify the file types whose downloads you want to be password blocked by adding their extensions. If you want to block all downloads, simply enter *. 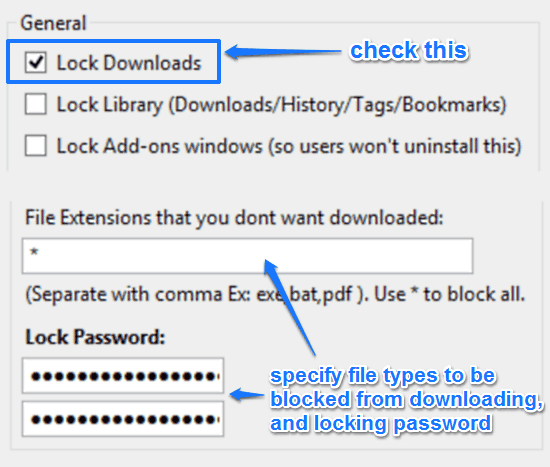 Friggin’ good, ain’t it? As illustrated by the above screenshot, the download won’t start until the authenticating password is specified. The best part is, this thing works even if you’ve already specified a default download location in Mozilla Firefox’s settings (Public Fox overrides that, and you’re still required to enter the password before the file can be saved to the disk). How cool is that?

Just like downloads, Public Fox can also restrict access to certain websites via URL blacklisting. To do so, add the website(s) that you want to block to the blacklist, specify the authentication password, and hit OK. Here’s a screenshot: 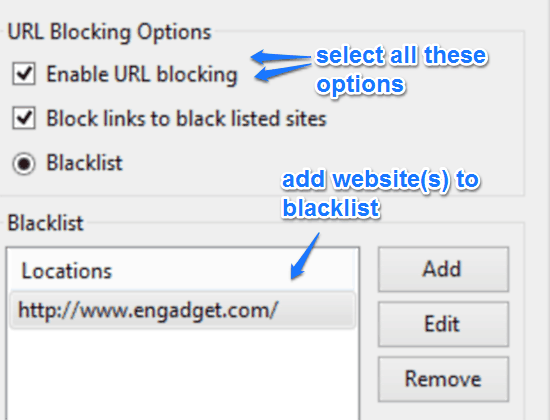 Also See: Firefox Extension To Get Detailed Information About Downloads

Public Fox is a really versatile Mozilla Firefox extension to block Downloads, URLs with Password. It’s simple to use, includes a ton of options, and works exactly like it says it does. Features like URL blacklisting, and the ability to block almost every single constituent module of Mozilla Firefox with a password make Public Fox quite a winner. If you’re looking for a simple yet effective way of taking control of your Firefox browser, look no further than Public Fox. It’s that good.