Update 2022: Comic Hoard doesn’t exist anymore. We recommend you to use any other websites form this list.

Comic Hoard is a great free website to read popular comics. Focused towards simplicity and ease of use, Comic Hoard lets you read a variety of widely popular comics online, without requiring any annoying subscriptions, accounts, or anything of that sort. In fact, all you have to do is just select a comic strip and read it. Amongst the comic strips that you can find on Comic Hoard, are some of the most popular and recognized comic strips such as Garfield, Calvin And Hobbes etc. While some of the comics are presented in a sequential order, others let you jump to a specific number in the title, or even to a specific date. Almost all of the comics are loaded up in a continuous vertically scrolling list, allowing you to read as much as you want. You can also directly like the comics and share them on Facebook. Sounds fun? Let’s find out more.

As mentioned in the beginning of the article, Comic Hoard is focused on simplicity and ease of use, and as such, there are no complicated signups, or subscriptions. There’s just a handy collection of great comics to read. Same goes for Comic Hoard’s website. Here’s how it looks like:

Pretty simple, isn’t it? As illustrated by the above screenshot, Comic Hoard features an utterly bare-bones interface. There’s just a header bar at the top, running across the entire width of the homepage, having nothing except for a couple of buttons linking to Comic Hoard’s Facebook and Twitter pages, and to contact the Comic Hoard team. Down below, there’s a listing of all the comic (strips) that are currently available on Comic Hoard. These buttons act as handy shortcuts to any specific comic that you might want to read. The homepage itself consists of a vertically scrollable listing of randomly selected comic strips. This ensures that even if you’re not in the mood to look for a specific comic (strip), you’ll always have something interesting and fun to read.

How To Use This Free Website To Read Popular Comics?

Using Comic Hoard is so ridiculously easy, I’m not even sure whether I should even write about it. There isn’t actually anything involved. All you have to do is just go to the website and get started. In any case, here’s a little step by step process, to get you started with Comic Hoard:

Step 1: Head over to Comic Hoard. Once on the homepage, you’ll see a vertical listing of randomly selected comics. To read one, simply click on it. Once you do that, the comic will open up full screen for you to read.

Step 2: If you would like to read a specific comic (provided it is available on Comic Hoard, obviously!), select it from the listing mentioned on the header bar, and Comic Hoard will display all the comics catalogued under the section. When you’re viewing a comic, you can also change the order in which it’s displayed. Apart from that, you can also skip to a specific comic number (or a date, if available). As simple as that! 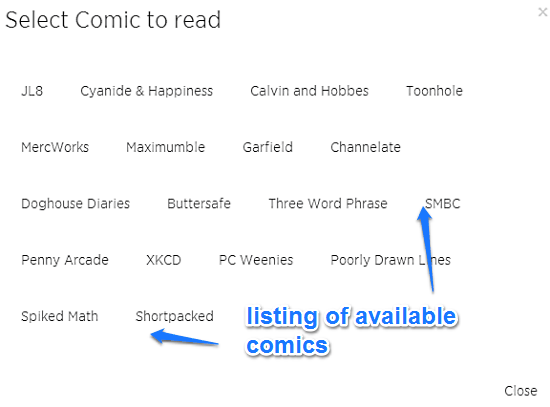 Comic Hoard is a really fun website to read popular comics. It has a sizeable collection of freely available comic books (including some really popular titles), it’s super easy to use, and well, what else do you want? I suggest you do head over to Comic Hoard and treat yourself to some good ol’ Garfield adventures.