Make a Zombie 2 is a free iPhone app which lets you create your own customized zombie. It is the second edition of this app, as you would have guessed by the number 2 at the end of the app name. The only difference between the two being the layout. I actually preferred the layout of the first one better. But, the app lets you create zombies in your own style. It provides you presets for eyes, head, mouth, hair, hands, legs, shoes, clothes, etc. which you can choose from to create a zombie. The app lets you create zombie images from cartoons (not your real images); unlike some other zombie apps which allow you to turn your and your friends photos into zombies.

Once you launch this app, the interface shown to you can be seen in the screenshot below. 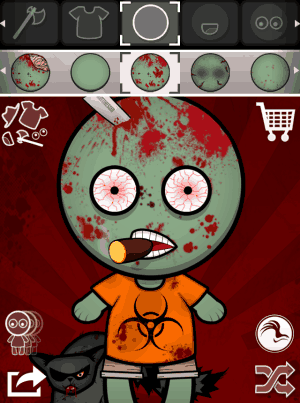 Another highlight of the app is the foregrounds and backgrounds it provides. Using these you can make your zombie look like swimming under water, or trapped in a glass jar, etc.

Now you can choose which part of the body you want to change. Select that body part and you will be offered with preset options to choose from. For example, if I selected head from the top scrollable list, then I’m shown various head types in the scrollable list below. This can be seen in the screenshot above.

The app also lets you add a zombie pets, so your zombie doesn’t get lonely. You can actually create scary zombies or pretty funny looking zombies. Just save your creations and move on to creating a new one. 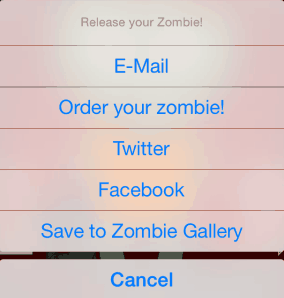 You can unleash all the zombies created via Facebook, Twitter, Email, or save them to your photo gallery. You can see on the above screenshot an option to order your zombie. This option lets you make a direct order from the app to get your zombie creation printed on tshirts, mugs, etc. This option did not work for me, so I’m not sure if its a problem with the app, or its a paid feature.

As I mentioned above with the new background and foreground options you will be able to customize your zombie brain eaters further. Adding a pet with your zombie is another good feature of the app.

That is pretty much there is to the app, incase you a fan of the zombie movies franchise, and have ever thought of creating a zombie of your own, then try out this app. You will be able to create your own personalized zombie to unleash on to the world. I know its not one of those apps which lets you convert photos of you and your friends into zombies, which is by far more fun. But it is nice in its own way, where you can create zombies out of cartoons.

Get Make a Zombie 2 for iPhone free from here.