Interface of the app is almost plain vanilla and there is nothing special here; but if you prefer functionality and options over looks then you will like this app. One of the best feature of the app is that you can translate the language automatically and also listen to the translated text automatically. 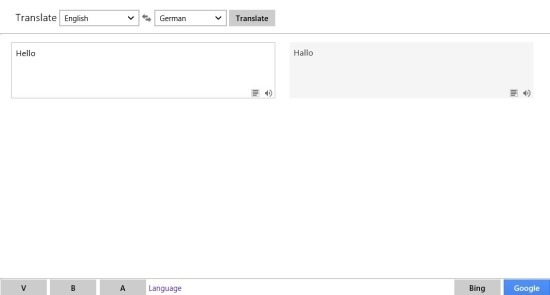 You can download and install this app from the link provided at the end of the post that will re-direct you to the Windows Store. You can also search for the app in the productively section of Windows Store and one thing that I liked is that app is really light-weight with the total size of 137 KB. After you have downloaded and installed this Translate 2 you can run this free translator for Windows 8 from the start screen and you will have the interface in front as shown above in the screenshot.

How to use the app to translate text in Windows 8:

The app is very simple, let’s see what steps are required to translate

Step 1: The first thing that you have to select, the source language and the output language in which you would like to translate to.

Step 2: Then just enter or paste the text to be translated in the text box to the left of the app window.

Step 3: Now all you have to do is click on the translate button to translate the text.

Step 4: And the translated text will be shown on the right text window of the app.

Step 5: Also just click on the speaker to hear the translation.

Step 6: In the bottom part of the app some controls are located as seen in the screenshot below. Let’s learn what each of the controls do. The two buttons located on the right side help you switch between Bing and Google. Now clicking on the language area which will bring up the menu from where you can select the language of the app interface. The other three buttons located on the right are self explanatory with the help of the screenshot that is shown below.

Features of free translator for Windows 8: